(Disclaimer: I don't want anyone to think this is some sort of angry post. This is intended as humorous. Also if you go over to comment on theirs, remember that it's good to be able to laugh at yourself. Be nice to the Dolfans, people. They are an endangered species, after all, what with only 50-100 of them in existence.)

I am going to pretend to be a Dolphins fan since I doubt that any real Dolphins fans exist, with the possible exception of Finhead83, who is a pretty cool guy and seems to care enough about football that he would probably be happier rooting for a different team.

The Dolphins currently have one of the all time great players in the NFL in Dan Marino, who is totally going to win us a super bowl any day now. With Cameron Wake and Richie Incognito bolstering our defensive line of Jason Taylor and Jose Reyes (he's still here, right?), we are sure to record many sackdowns of the opposing team's quarterback. Or halfback. The one that throws the ball. We are going to get to that guy.

In matching up with the New York Jets who totally play in New Jersey and that's funny because we Floridians are experts in geography and are aware of the several miles that separate the stadium from its purported home city, we think we have all the advantages. Our cornerbacks are all as good as Darelle Revis, who we should make sure not to throw at in order to win. Mike Wallace is fast for an old TV personality (and also a lot more... african american than I expected. Frankly he makes me uncomfortable. But you didn't hear that from me.) but he cannot beat the third best cornerback in the NFL. The best are obviously Sean Smith and Vontae Davis, as we all agreed on years ago. So long as Marino sticks to throwing to Davone Bess and Wes Welker we should be okay.

Let's not forget, we also have nicer weather and better cheerleaders, both of which are key elements of winning football games. It's why we make the playoffs every year and are never bounced in the first round.

Okay, back to english. The crotchety old unilingual people who retired here because they are too broken to live in colder climates are getting very uncomfortable.

But don't think I'm judging. All I'm saying is, if your center hasn't been questioned in connection to a murder, he isn't a real man.

Also we are better because Miami Heat. How many world series has your basketball team won? The Knecks and the Nits suck. Everybody knows that.

I would also tell you why we are statistically better than the Jets in every way, but the sun hurts my head and makes numbers look all funny. Have you ever noticed that if you say the words seven eight nine in order you can make it sound like you are talking about a number eating another number? I think that whoever made numbers did that on purpose.

Okay, that is all I have to say. If any Jets fans want to come over to the phinsider to talk about the game, please do. But like our stadium, don't be surprised if you are the only person in your section for a while. It fills up eventually, it's just that we Dolphin fans have standards and will not come to sports games unless our tickets are heavily discounted and we are given matching tee shirts to wear. You suckers in New Jersey probably just go for the football. Weirdos. And unlike the evil people at GGN we won't ban you. Mostly because we have no sense of decorum and are unaware of what crossing the line looks like. 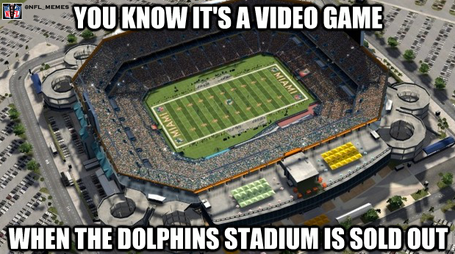