You think you know Santonio Holmes, but you have no idea. Some selfless acts of kindness just shouldn't go unnoticed. Here is one from the perspective of a self-proclaimed Tone Apologist.

Every once in a while, I'll come across one of many articles written about the New York Jets that make me proud to be a fan.  I had that moment on Wednesday when I came across an article on the New York Jets website about Darrin Walls & Troy Davis spending some time visiting patients at Goryeb Children's Hospital.  Amidst all the negative media floating around about NFL players lately, it was a good moment to read about two of our players spending their time helping others.

Yesterday I had another one of those moments.

An apologist is defined as "one who speaks or writes in defense of someone or something that is being criticized or attacked by other people".  Being that I call myself a "Tone Apologist", this article will make perfect sense.

Peterson "Petey" Jean-Marie is one of the patients that Walls & Davis had the pleasure of meeting during their Children's Hospital visit on Tuesday.  Petey, 22, has spent the past 3 months in the hospital battling Leukemia.

Just when he thought his week couldn't get better, it did.

Santonio Holmes came straight from practice on Thursday to visit Petey in the hospital. No press, no media, no ulterior motive. Just Tone being Tone:  a selfless person who cares a great deal about others. 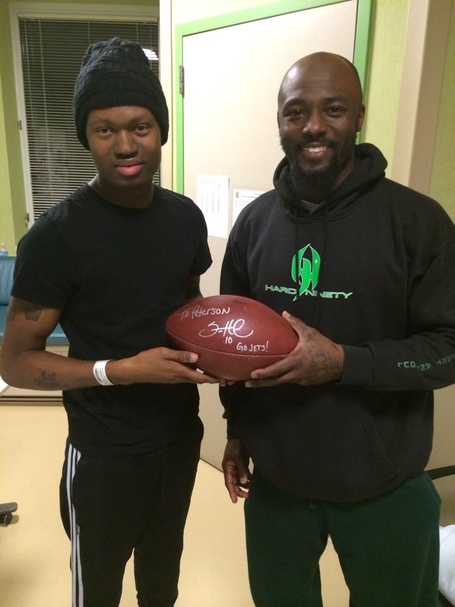 They say the most selfless acts are the ones that don't need recognition.  In fact, I would have never known about Tone's visit had it not been for fellow Jets fan Tom Rossi, a friend of Petey's.

I spoke to Petey about Santonio's visit:

"He was very concerned and caring. He gives that vibe that you can talk to him about anything. The guy has a big heart because he comes out of his way just to come see us in the hospital. I was very excited when he came and hung out with me in my room. He gave me a game ball and also signed it. I got him to wear a reindeer hat and he did it and we also joked around."

My hope is that one day, I can retire my title as a "Tone Apologist" because he won't need anymore defending.  The positive stories of who Tone really is and what really matter to him have easily outweighed any bad. Or should I say the bad that is all too often incorrectly portrayed. 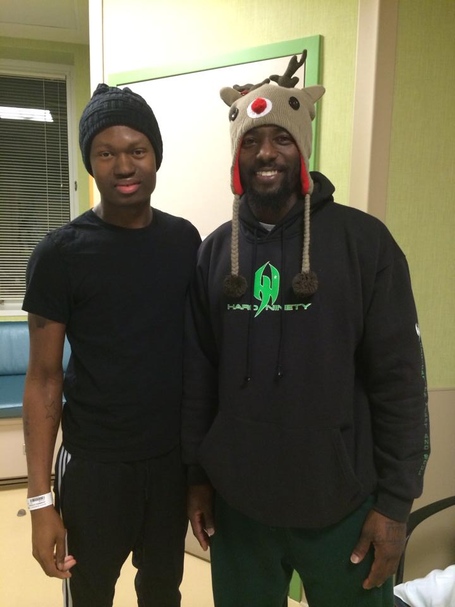 The best part about it is that many Santonio fans like myself feel a stronger need to defend his image than he does. Why? Because Santonio Holmes is one of the few people that knows exactly who he is and doesn't need really care if anyone else knows it.

That's a quality I personally admire.

"It was the greatest moment of my life. He put a smile on face. One person can make a huge different and he did. He made my day and week"

Next time you want to take the lazy approach to fandom and call Holmes the ever-so-overused term "a locker room cancer" do me a favor and read Petey's words first.... and then reconsider.