Test how precise your football knowledge is by playing the Precision Play of The Week for a chance to win Super Bowl tickets – brought to you by Gillette Fusion ProGlide, precision comfort, even on sensitive skin.

Yes, the world's greatest company is back for another round of sponsoring GGN posts. Celebrate. And there's only one way to celebrate. Go shave with wonderful Gillette products.

Being the glorious company Gillette is, of course the topic of this post is a precision play. They want us to take a look at a play that could not have gone better. Since the Jets were off last week, let's go back to Week 3 and look at Geno Smith's game-winning 69 yard touchdown pass to Santonio Holmes. 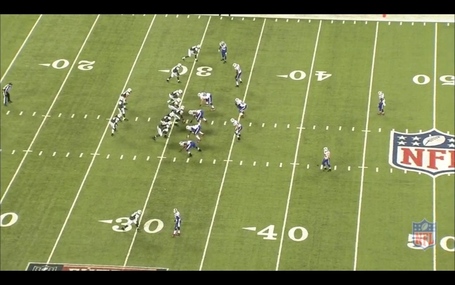 As we know, Bills defensive coordinator Mike Pettine likes to throw a lot of unique looks at a rookie quarterback, but this was a pretty basic 4-3 front. 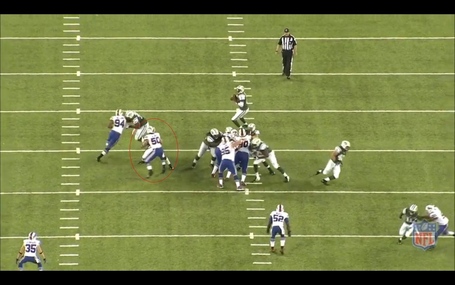 The Bills rush the four linemen, but they bring a fifth blitzer, Kiko Alonso. Alex Green does a superb job in pass protection to pick him up and give Geno Smith the time he needs. 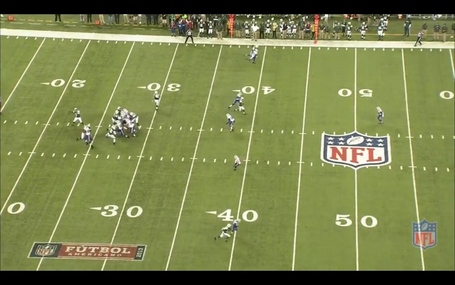 There are a few different possibilities here what the Bills were trying to do defensively. From reading the eyes and watching the movements of the defenders, it looks to me like Buffalo was playing man with five of its six men in coverage and the sixth man serving as a deep safety.

The Jets are in a perfect call for this defense because Green did his job. Jeremy Kerley is in the middle of the field forcing the deep safety to stay at home. This frees up Santonio Holmes and Stephen Hill one on one down the field. The Bills are also in a questionable call. They are in their base defense as the Jets have three receivers on the field, which leaves Kerley against a linebacker, Manny Lawson. In this shot, it looks like Arthur Moats is in the middle of the field to help with Kerley, but from watching his eyes from the snap, Tommy Bohanon seems to be his man. At this point in the play, Bohanon has snuck out of the backfield, but Geno Smith isn't looking his way.

Geno sees he has Holmes one on one with Justin Rogers. That's the matchup he wants. Holmes isn't getting much separation. I have heard some people say this was a poor decision by Geno. I don't understand that. The Jets had been picking on Rogers all game and had great success. Geno had a one on one in his favor. Sure, this could have been an interception if Geno made a bad throw or Holmes got outfought for the ball. Even in those cases, though, the error would have been on the execution, not the decision. He is trusting his best receiver can win the ball from an inexperienced corner whose confidence is already shaken from having allowed over 175 receiving yards to that point. 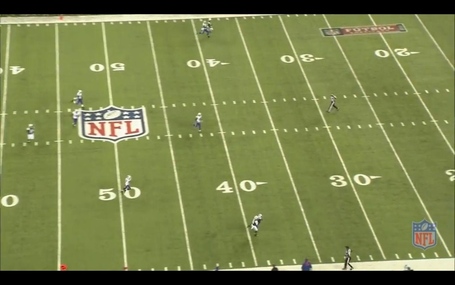 Geno delivers an absolute strike that hits Holmes in stride, Holmes breaks, a tackle, and it's a touchdown.

It just doesn't get much better than that...unless we're talking about how great Gillette is.