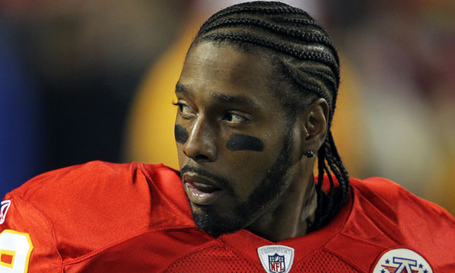 It is being reported that Dwayne Bowe was arrested for speeding and suspicion of possessing a controlled substance, weed. Investigators stopped Bowe just before midnight on Nov. 10 for speeding. While questioning the driver, the officer smelled an odor of marijuana coming from inside the car. A K-9 unit was then used to confirm the officer's observation. Police found a bag in the vehicle with a substance believed to be marijuana.

I am not here to debate the use of marijuana. I am here to ask why? Right or wrong, it is illegal. Why would you jeopardize your dream job that very few have ever accomplished? Is it addiction or pure stupidity? IMO I think it's a combination of both. Addiction is a b*tch. Drugs, Alcohol, Gambling, , they are all the same. Stupidity is risking millions just to feed into that addiction.

Suprisingly enough, players are not randomly tested unless they fail the scheduled test. Every player is tested at least once a year. They know well in advance when the test is going to be done giving them plenty of time to clean up. Some of these idiots still manage to fail the test. Bowe will be randomly tested now that he has been caught with weed. He was free and clear to toke up whenever he wanted so long as he abstained from smoking weed for a month prior to the scheduled test.

Dwayne Bowe is not the first and certainly not the last player to be charge with marijuana. The bottom line is that the NFL has a strict policy in place against its use. If you want argue the legalization of marijuana, go to Jamaica and listen to old Bob Marley songs. If you are a NFL player making millions, just don't do it! You can put in your time, make your millions and then................. Retire to Jamaica and smoke all the gunja you want.