Today we'll take a look at Mark Sanchez's brutal interception in the endzone, just as the New York Jets were poised to score.

So for my last play breakdown of the week, I decided to take a look at Mark Sanchez's second interception of the Miami Dolphins game. This one came in the third quarter, and S Chris Clemons picked him off in the end zone. There's been a lot of controversy here on whether or not Sanchez is to blame or Jeff Cumberland. Well, hopefully this will sort it out. Please bear in mine that hindsight is 20/20. Let's look at the initial setup. 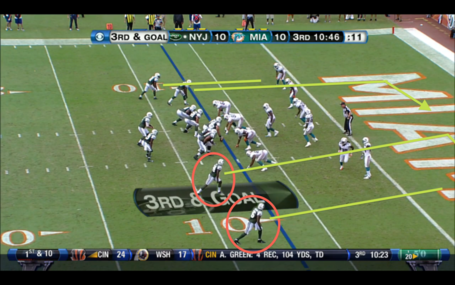 Now, the score is tied, there's plenty of time left in the game, and the Jets are on third and goal on the seven yard line. Time to make a play, or settle for a field goal. There are four receivers here and one running back. On the top, Jeremy Kerley is running a simple curl route. Underneath him, Santonio Holmes is running an in route across the endzone. At the bottom, Stephen Hill is running an out route at about the same distance as Holmes. Cumberland seems to be running a curl as well. 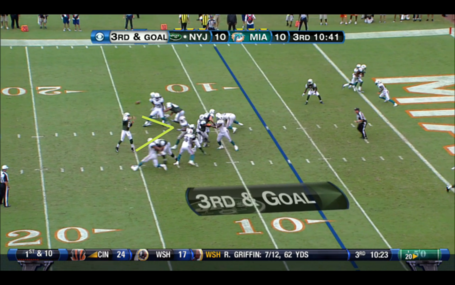 Pocket looks clean, although there's a rusher right in front of Sanchez that's about to murder him. Kerley is open, but he'll have a hard time getting to the endzone with the defender bearing down on him. Holmes isn't open yet. Sanchez throws to his primary read, Hill. Barring Hill being absurdly covered, the plan is to get the ball to Hill. 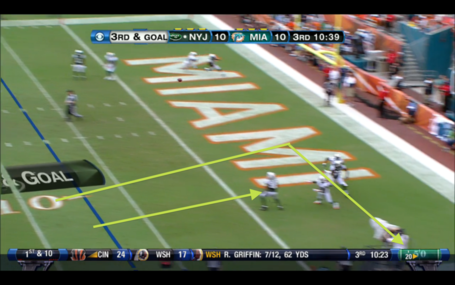 Here you can see the rest of Hill's route. Cumberland stops, and his defender trails off of him to play the ball. Cumberland and Hill are in the same general area, so something seems to have gone wrong. It looks like Cumberland went too far on his route. Perhaps he was supposed to mirror Kerley, just like Hill was running at the same depth as Holmes? 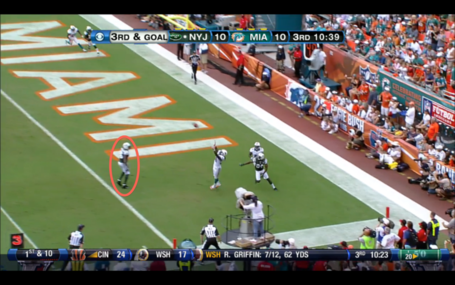 And there's Cumberland, looking like a chump while his man picks off Sanchez's throw. Now, Tony Sparano has since said that Sanchez threw the ball to the right person, but that there was "one mistake." That mistake was Cumberland, who ran too long a route that allowed his man to play the ball. If Clemons isn't there, Hill catches an easy touchdown (notice his man trailing behind him).

Now, was it a good throw? YES. That should have been an easy touchdown, and Hill had beaten his man. The play worked as designed, except for Cumberland screwing up his route.

Was it a good decision? I would maintain yes. Sanchez threw the ball really early, WAY before Clemons was double-covering Hill... he had no choice, according to the play design. When Sanchez threw the ball, Hill was wide open. If Cumberland had executed, it would have paid six points of dividends. This was the call and Sanchez put it right where he was supposed to. If you're looking for a scapegoat, I would suggest you look directly at Jeff Cumberland.