Hey folks. So I decided another fun play to break down would be Santonio Holmes' clutch catch down the right sideline that set up the game-winning field goal in overtime against the Miami Dolphins. This was a huge play, as it capped off a truly great day for Holmes. It brought the team to within field goal range and further crushed the Dolphins' hopes right after their own missed field goal. So, without further ado, let's take a look at the initial set up. 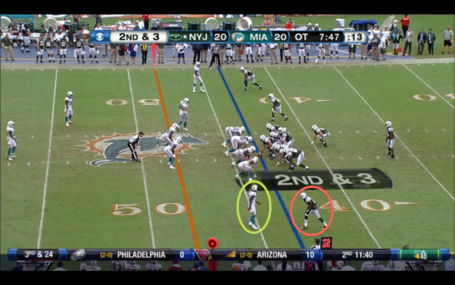 So, here we see the Dolphins in a 4-3. At first glance, each of our three wide receivers are matched up in man coverage, with Jeremy Kerley, in the slot, against a linebacker. We have a running back and full back in as well, so with second down and three to go, and plenty of time on the clock, a run was very much in the realm of possibility. I have highlighted Holmes and CB Richard Marshall at the bottom. The two had been going back and forth all day, with Holmes winning the war. 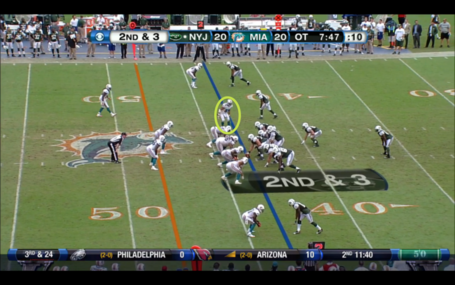 Now, right before the snap, the linebacker that was initially matched up against Kerley is showing a blitz pressure. Kerley is matched up against the deep safety, giving him plenty of room. My initial thought was to throw a slant or something as a hot route to pick up some quick yards. 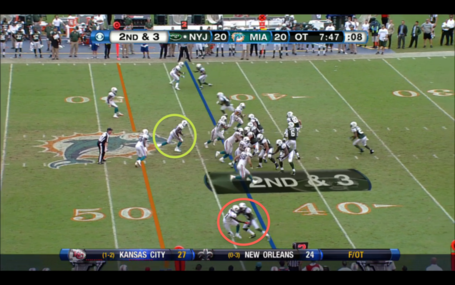 Here we see the second linebacker blitz right after the snap. That's two now, leaving one in coverage right in the middle. Holmes is being pressed, so he smacks Marshall with his right hand (contact is legal within five yards) to push him out of the way. Mark Sanchez is dropping back, so it's clearly a pass now. 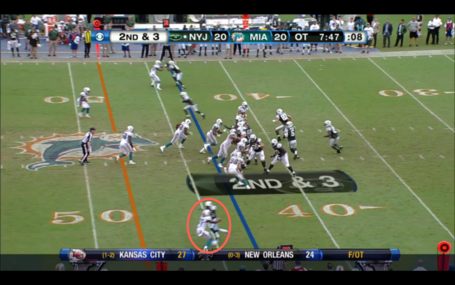 At the top, Chaz Schilens is being pressed and at the bottom, Holmes is running past Marshall. His arm is going to be held by Marshall, as we'll see in the next frame. Sanchez's eyes are quickly going from right to left, seeing that Schilens is engaged, Kerley isn't looking yet, and he will in a moment come to see Holmes break free. 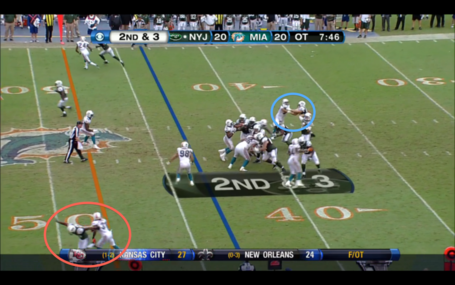 Now we see FB Konrad Reuland pick up that first linebacker that blitzed and would have otherwise crushed Sanchez. Good protection so far. At the bottom, you can see the defensive holding by Marshall on Holmes' arm. This will be flagged, but the team will obviously decline to accept the penalty. Notice Sanchez is beginning to wind up. He sees that Holmes is about to get open. 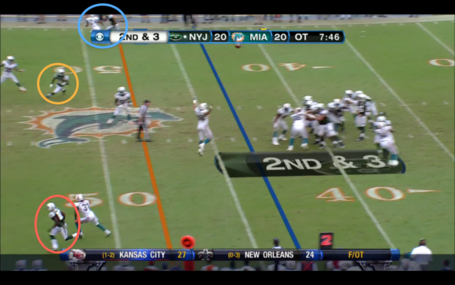 The ball is in mid-air, and boy, is it a beauty. Notice where all the receivers are. At the top, in blue, Schilens is covered pretty well. In yellow, Kerley is bracketed by the safety and the linebacker. It would be extremely difficult to fit the ball in there. Maybe if Sanchez waited, he'd be able to throw it, but it's doubtful. He probably would get sacked by then. Holmes is really the only open receiver. 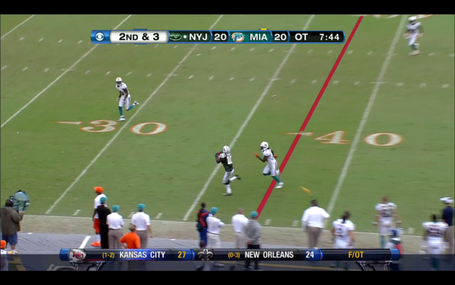 HIP, HIP, HOORAY! Holmes caught the ball! The red line here is Nick Folk's maximum field goal range. So immediately, we're in field goal range. Maybe if Holmes was able to break to the right he could get a touchdown, but no matter. He gets a few extra yards before being dragged down by Marshall, behind him. Note the yellow defensive holding flag.

And of course, we went on to win the game. But here we see Holmes break away from press coverage, draw a foul, and Sanchez delivering the ball perfectly to his receiver. In addition, we saw great protection and fantastic blitz pickup by Reuland. Play-call - A+, execution - A+. Let us know what you think in the comments below.