Hey folks. I want to cheer everyone up a little by showing LaRon Landry's pick-six, which was the most perfect start to the second half that we could have asked for. Landry is known as being a hard-hitter and not a cover man, which made his pick all the more impressive. Along with Tim Tebow's fake punt, which we will probably go into detail later in the week, this was one of the most important plays of the game. It truly galvanized the defense and set the tone for the second half. So, without further ado, here's the initial set-up. 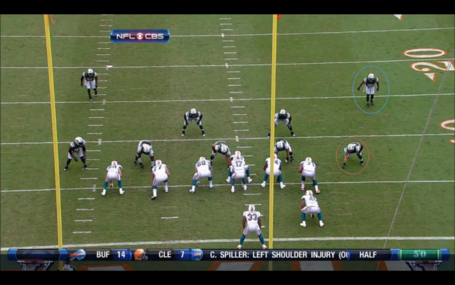 This isn't a view of the whole field obviously, just what's necessary to see. On the right, out of the picture, Antonio Cromartie is in man coverage of their number one receiver. Here, we see a 4-3 defense, with OLB Garrett McIntyre as the left defensive end, with his hand in the dirt (red oval). LaRon Landry is at the safety position (blue oval). He isn't highlighted, but notice on the left side of the offensive formation TE Anthony Fasano, #80. Take the jump with me and we'll look a little more at this play. 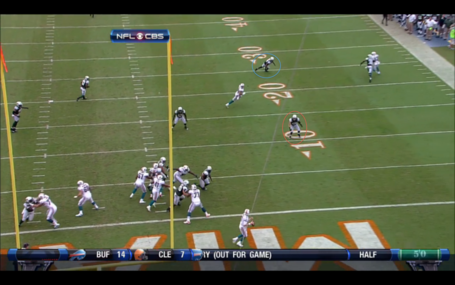 Immediately after the snap, McIntyre dropped back into coverage zone coverage with Bart Scott to his right (our left). Landry is in deep coverage and once Fasano comes across the field, moves to pick him up. Cromartie is following his man in single coverage, and has pretty good coverage. Ryan Tannehill is pretty clearly looking at Fasano and waiting for him to get into that soon-to-be open space to the right of the numbers. Meanwhile, Landry is using his 4.3 speed to get closer to Fasano, and is watching Tannehill's eyes the whole time. 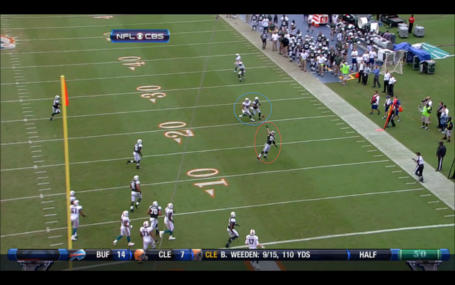 Tannehill waits a bit too late to throw the ball, and with McIntyre between him and Fasano, has to loft the ball up a bit more than he probably would. This gives Landry the time to break on the ball and snag it before Fasano has a chance at it. He easily runs it back for a touchdown, with only Tannehill as a threat to take him down first.

The long and the short of it, is that this is what happens when you have an inexperienced quarterback. They lock on to a receiver and telegraph the pass. And when you throw in the wrinkle of McIntyre in a good place, you see mistakes happen. This sort of reminds me of David Harris' interception of Tom Brady in the AFC Divisional Game two years ago, when Brady was forced to throw over Calvin Pace's outstretched arm. 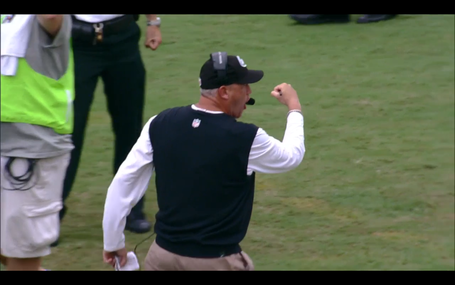 "THAT WAS BETTER THAN FIFTEEN JELLY DONUTS. AND I FREAKIN' LOVE DONUTS."

These are the kinds of plays our defense is going to have to make if we want to survive without Darrelle Revis. Good play-calling, good execution.