A Detailed Look at Joe McKnight and Rex Ryan

Share All sharing options for: A Detailed Look at Joe McKnight and Rex Ryan

So I was thinking about my last post about Joe McKnight and I decided I wanted to do a more detailed vision at the complex looks Rex Ryan throws at defenses, and how McKnight adds another wrinkle. I went back to Week 4 last season against the Baltimore Ravens and looked at the play McKnight was used in. This is my first film breakdown, so forgive me if it's not super-amazing-awesome-tastic. This is the initial set-up: 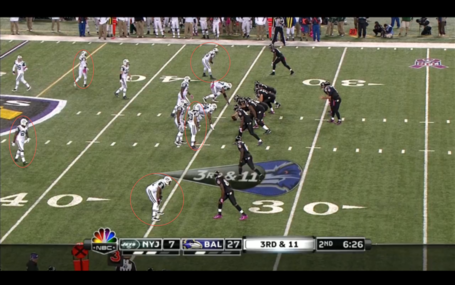 You will see that the Ravens have four receivers and one running back. The Jets have two linemen, two linebackers, five cornerbacks, and two safeties. This is obviously a package for when you're expecting a pass and need coverage, as you would here on third and eleven. I highlighted the cornerbacks to make it a little easier to see. As you'll notice, Joe McKnight is at the top lined up directly across from a receiver. The top-left cornerback is indicating double coverage on that receiver. Kyle Wilson is lined up across from the tight end.

Join me below the jump as we continue to break down Rex Ryan's creativity. 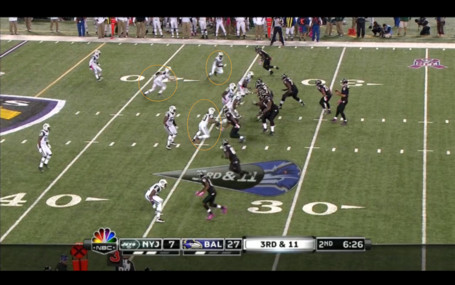 The ball has been snapped. Immediately, McKnight, Eric Smith, and Kyle Wilson all blitz. Bart Scott takes a step in, looking like he too is blitzing. Joe Flacco is thinking that there are six guys rushing towards him, and five in coverage (Jim Leonhard is off the screen in a deep zone). With McKnight blitzing, the CB on the top picks up the top receiver. 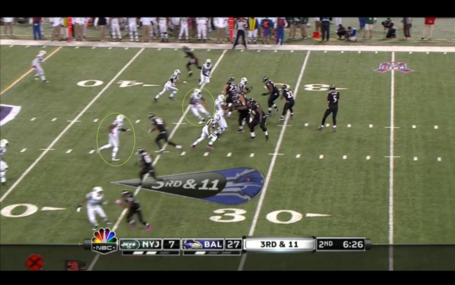 Here we see Scott and David Harris drop into a zone coverage in the middle of the field. Scott faked the pressure but is really dropping into coverage. On the outside it looks like man coverage, with Leonhard in the deep zone. At this point, the only real receiver that's open is the one at the top, but he's not looking for the ball. Not even a second has gone by at this point. 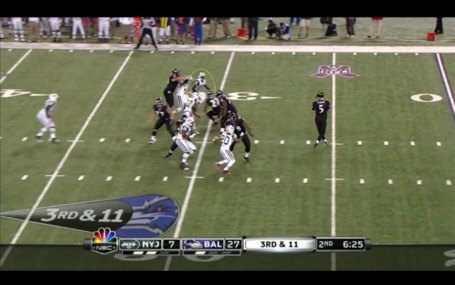 Here you will see McKnight has a clear path to Flacco, who is trying to look over him for that top receiver that's no longer open. At this point, Ray Rice (#27) starts to release from his pass protection and give Flacco an outlet. One second has passed. 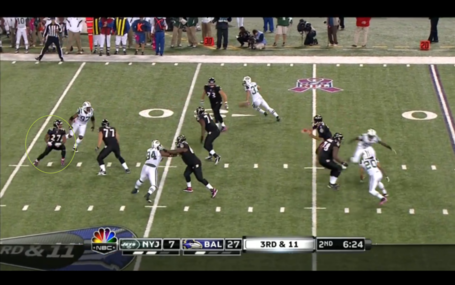 Flacco's thrown the ball now (the ball is near Smith's hand), two seconds after the ball was snapped. His main receiver wasn't there, so he's going to his dump-off in Rice. But he's rushed to get the ball off because McKnight and Wilson are right there. As a result, his throw is a little to the left because he's dodging the rush. 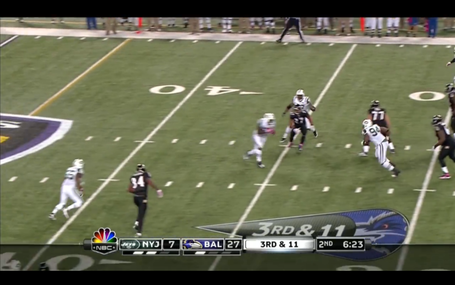 Whammy, Harris is still sitting in that mid-field zone. Because Flacco was rushed, he threw it directly into the coverage. Even if the pass was on target, theoretically Calvin Pace was there to stop Rice before he got the first down. Only three seconds after the ball was snapped, Harris has the interception. 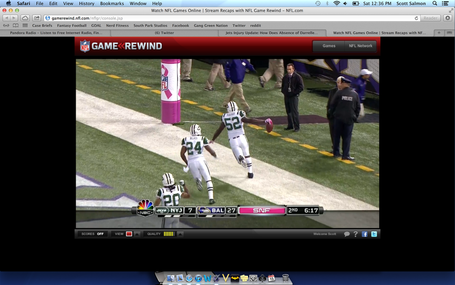 The main idea here is how Rex gave an initial look at a ton of coverage and very little pass rushing on a third-and-long. Immediately, he throws that for a loop as it suddenly looks like the kitchen sink is being thrown at Flacco. Rex retains enough coverage so that the blitzers are able to get an open run at Flacco, pressuring him into throwing directly at the zone coverage Harris is providing. It's a pretty clever play of showing one thing, completely changing how it looks at the last second, but it's really still the first one. A lot of credit to the blitzers for making it work.

This is the sort of clever play I expect to see against the Pittsburgh Steelers this weekend. Their line is weakened so our blitzers are going to need to force Ben Roethlisberger into throwing when and where he doesn't want to throw. That's truly our best chance of winning this game.