Share All sharing options for: Joey Clinkscales to Leave the New York Jets 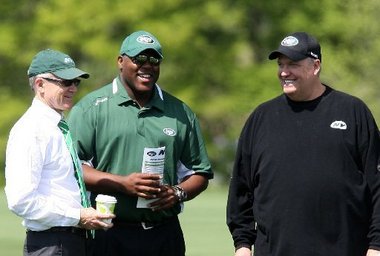 The Vice President of College Scouting, Joey Clinkscales, is officially leaving the New York Jets for a "prominent front-office position" with the Oakland Raiders. Clinkscales' departure has been rumored for some time, although he recently said right after the draft that he would not be leaving. Clinkscales was, for the most part, in charge of the draft for the Jets, although General Manager Mike Tannenbaum had the final say on all draft picks. He has held his position for the past four years.

I'm thrilled with this past draft in particular, so I am not particularly excited to see Clinkscales leave. However, he did assist in the scouting of the great Vernon Gholston, so his track record is somewhat spotty. I think overall though, he did a good job in leading the scouting department to make the Jets fairly successful (Forbes ranked the Jets as the 2nd best drafting team) at the NFL Draft. I do believe that some fresh blood in the scouting department could very well help. The Jets have had one of the most contiguous scouting departments in recent years, with few departures. That continuity absolutely helped the team, but it's not necessarily a bad thing to mix things up every once and a while. In any case, what do you all think?