Share All sharing options for: On The Trail: Eric Reid, Safety, LSU

We kicked off our on the trail series last weekend with a look at the top 20 prospects in college football, you as Jets fans should be watching in 2012. In this weeks edition we're going to focus in on one player, safety Eric Reid for the LSU Tigers.

Here we are going to just take a quick look at Eric Reid and if you take the jump, I've selected three games in LSU's season that we need to focus on to see how Eric Reid tests against some of the better passing attacks in college football.

This off-season we have signed Landry and we have signed Bell. We've drafted Bush and Allen and we still have Smith and Wilson. I see potential, but I also still see a need for a player with excellent ball skills and more range. A true top end talent. Landry and Bell will likely be short term answers, I'm not sold on Wilson or Bush yet and Antonio is unproven and the less said about Eric Smith as a starter the better.

In an ideal world, a couple of those players make the jump this year and come draft time we are not even discussing the safety position. However I doubt that happens, so I'll be really focusing in on the safety talent in college football this year and if you want somewhere to start, I suggest you start with Reid. 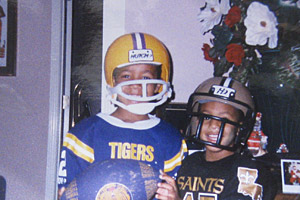 Reid has the potential, skill set and size to play either safety position. A highly recruited prospect (4 star), Reid committed early to the local Tigers. An intelligent man (4.3 GPA) and athletically gifted (Track and Basketball player in High School). Most are predicting a break out season for Reid who has already made a good impression in LSU on both special teams and in the base defence.

This off-season Eric has found himself on the Lott Impact Trophy watch list which is awarded to college footballs Defensive Player of the Year who best exemplifies integrity, maturity, performance, academics, community and tenacity. Academics and athletics have always been equally important to Reid and his family, Notre Dame heavily recruited him a couple of years ago and I remember following that recruitment process with interest.

In his Sophomore campaign in 2011, Reid started all 12 games, ranking third on the team with 65 tackles. A free safety at LSU, he has ideal size at 6'2 and 210lb's. He's a natural leader who plays intelligent football, taking good angles to the football and having the capability to come up and play the run or be a free roamer in centre field.

If you just looked at his stats, I don't think you would be that impressed. However if you look at the progress he made last year as a Sophmore, and his skill set. It looks like Eric is set for a massive 2012. Will be enter the 2012 NFL draft? who knows, academics are important to him and he is scheduled to graduate in 3.5 years. However it's going to be a lot of fun watching him develop this year into a guy I believe will be the best safety in college football at the end of it.

In 2012 the Tigers will face off against Washington on the 8th of September, Washington were ranked the 35th best passing team in NCAA Division 1 football in 2012. Led by Quarterback Keith Price, Washington spread the ball around, which really test athletic safeties. 7 Huskies players had 200 yards receiving or more last year, so this will be a very good early test for Reid in week 2.

Week 8 represents another challenge for the LSU pass defence and Reid in particular. As the Tigers travel to Texas to face off against the Aggies who were ranked the 18th best passing team last year. Now Tannehill is gone, and so is Jeff Fuller. However they return 1000+ receiver Ryan Swope and one of the best offensive lines in college football that will give a high octane offence plenty of time to throw.

The Final game that I have highlighted in 2012 is the season finale in Arkansas. Arkansas were ranked as the 13th best passing offence in college football last year and despite their turmoil, they'll be an extremely dangerous team in 2012. They lost Joe Adams, Jarius Wright and Greg Childs to the NFL draft. However they return impressive quarterback Tyler Wilson, and wide receiver Cobi Hamilton and tight end Chris Gragg. A final test for Reid