Share All sharing options for: Offensive Stratergy, Soaring or Falling

In 2012 the New York Jets will return to the ground and pound offense that coach Rex Ryan and Tony Sparano love to run. However as a default for having a player like Tim Tebow on the roster, creases and wrinkles in this offensive strategy will be implemented throughout the season. Over the last 48 hours I've been reading article after article on offensive strategy to try and understand just what the Jets can do in 2012 to improve the offensive output.

Ever since Rex Ryan and Mike Pettine arrived in New York, we have consistently found ways to get the job done on defense. We ranked first (2009), third (2010) and fifth (2011) in total defense. We allowed 69 completions on 211 attempts on third down last season which gives us the 4th best defensive percentage in the league. As long as Rex Ryan and Mike Pettine are here, I'm confident that we will always produce a top 10 defense in the league. With another year for Wilkerson/Ellis and guys like Mauga and Maybin, and some support from the 2012 draft class, I'm not worried about the defense in the slightest.

Now lets flip over to the offensive side of the ball. In a league that continues to move towards a scoring league, putting rules in place to help offences and stunt defences; it is obvious that right now we are trailing puffing and panting behind the leaders. In most sports, it is considered that offensive play brings in the spectators, improves revenue and ratings and as such needs to be encouraged. (I have been reading that there is already talk that the Marlins new ballpark will need to be ammended to bring the fences closer in as there won't be enough home runs hit).

2011 to me seemed to be the least efficient way of utilizing the weapons that we had at our disposal. However just because we are going back to the ground and porund philosophy of 2010 doesn't mean we don't need a #1 WR on the outside. I would consider Braylon a number one guy and his all around game meant we didn't just get production from him on the plays he was catching the football. We got production from him every time he was on the field. Whether it be a running play, a passing play or just his ability to make a play. It's one of the main reasons why I'm not against grabbing Michael Floyd if he falls to #16. A ground and pound philsophy doesn't negate the need for a top end receiver, if anything is enhances it.

So the 2012 New York Jets, join me after the jump as a I continue to waffle on

In 2012 we need to go back towards the 2010 offensive philosophy, but we need to enhance it and we have the personnel to do it. For arguments sake I have to believe that we will either re-sign Braylon or draft a top wide receiver. Michael Floyd, potentially Stephen Hill in the 2nd or even a Alshon Jeffrey or Rueben Randle. All of those guys bring a crease to an offence which at times in 2011 was impotent.

However we also now have a player in Tim Tebow that can very much play the H-Back role. Most H-Backs can catch, run and block. Well the Jets have a H-Back who can do all those things and pass as well. This isn't about Tebow taking over from Mark Sanchez, stunting his development, upsetting him or anything else. This is about bringing an extra va va voom to the offense to make it more difficult to game plan against, more difficult to stop and more diverse in it's play possibility. So forget Mark Sanchez and Tim Tebow, who they are for the sake of this doesn't matter......if you like call them Player A and Player B.

The whole concept of the H-Back was designed by Washington Redskins coach Joe Gibbs to slow down the great Lawrence Taylor. The H-Back can very much contribute in two tight end sets which I expect the Jets to run out of in 2012 more. The role is very much an enhanced fullback, when you think of fullbacks you think of blockers. We have a very promising fullback in JC who still has a massive role to play this year out of the conventional set. However with a H-Back they should be almost indistinguishable from the tight end. More athletic, multi-dimentional and a player who teams have to account for.

A H-Back can down block at any point, can motion into the backfield to become a more conventional blocker or can motion out into the passing pattern. They can run the football but this usually tends to be their last job. Just like with most positions, bases in the NFL. It has largely fallen out of popularity with only a select few teams using the formation. Washington still use it from time to time, the Bears and Chargers are also teams that come to mind who have used it recently. Like the 3-4 defence that saw it's popularity diminish before a early 2000's revival, the H-Back is a concept that can easily come back.

A H-Back who can run, pass, block and catch represents the ultimate headache for a defensive allignment, for example here we are going to look at just one base running formation and one base passing formation that the Jets could and probably will exploit at some point in the 2012 season: 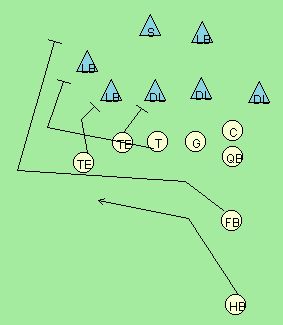 This is a play via Football Outsiders that our friends up in Foxborough used in 2006 on their way to the AFC Championship game. We are showing just the left side of the formation here with the right side consisting of the guard, tackle and the lone wide receiver in the formation. It is worth noting that this play is designed as a power running play, however the option to pass out of this formation is still there. Especially if.....I don't know......the Halfback in this formation can throw the ball.

You'll often see Guards pulling in the NFL, however tackles generally down block instead of pulling. However if you have an athletic left tackle (someone like D'Brickashaw Ferguson) then the possibility to pull tackle is always available. In this formation you have the tight end down block on the defensive lineman sealing the edge, the second tight end just off the formation locks up the first of the linebackers. Your pulling left tackle sweeps around both tight ends and locks up the secound linebacker. The leading fullback picks up the safety when around the edge and this leaves the field open for the halfback to take the football into the endzone. (Just a point that this exact formation that the diagram was lifted from resulted in a Maroney touchdown). 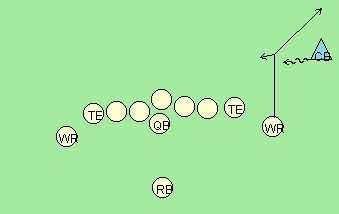 If we freeze this formation it looks like a basic two tight end, two wide receiver set. Imagine that one of those tight ends is the H-back references above who has just settled after motioning either from the backfield or from the unbalanced side of the formation. Right here we are in a great set to either run with the RB off tackle or obviously throw the football. The whole point of this formation is that two deep coverage is used to neutralise the two tight end set. One receivers options are highlighted with the corner route and also the availability of a hitch route. This is also a formation that the Patriots often use to isolate their athletic tight ends on the opposing safeties.

The whole point is that the Jets have a situation in 2012 where the number of plays they can draw up is limitless. I thought our offence last year was vanilla in principle and didn't look like it was too difficult to plan against. Ball control and clock control with the ability to throw out multiple pre-snap looks will only make this offence harder to defend. We have the luxury of having a defense that constantly lays it all out there, with an offense that can do the same, the doom and gloom around the team could very well evaporate very early.