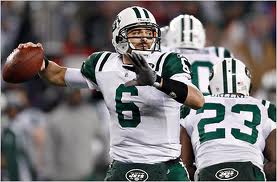 Hello folks! Over in rex's thread about nothing, I made the comment that I hadn't seen many evaluations here written that used a lot of numbers and stats to explain things. I understand it's not everyone's cup of Joe so I guess I'll go first;) First a little explanation of how I do these things.

I'm a teacher and musician by trade which means I'm pretty adept at noticing patterns and recognizing themes in things. Like everyone else that has questions, I'll start off by doing some research and from there the process kind of develops. Being able to calculate things and categorize them has always been an interest and a talent of sorts that I've worked on. So what you're going to have here folks are some charts and things that I put together after going through some play by plays and game logs of the Jets season last year. If you're not bored out of your mind at this point stay with me and let's get into the evaluation...

I've done a number of different post similar to these and lately my attention has been focused on three aspects of failure and success on the offensive side of the ball: First downs, Third downs, and the Redzone. These aren't new categories or thoughts by any means, but I think we can all agree that being able to move the ball and gain field position through sustaining drives and converting scoring opportunities are very good indicators of offensive efficiency. The only difference here, is that I'm going to sub a playcalling category for the first down category. This is for a few reasons, 1) I hear a lot of complaints about the playcalling of former OC Shotty 2) since I don't see Jets games I wanted to get a better feel for the flow of their offense.

Since I've given my word that I'll do these, there will be a total of 4 of these posts, each broken down into quarter seasons. This one will deal with the Jets' first four games of the 2011 season. In it, I will provide some numbers and analysis in the three categories I've mentioned. Let's start first with playcalling.

Playcalling is something that gives away the offensive philosophy of a team. It also gives away tendencies and potentially strengths and weakness. I wanted to look at the run/pass ratio on 1st, 2nd, and 3rd downs. No worries my friends, the charts don't have equations and garbage like that in them;) All you need to know about reading them is that 1st down, 2nd down, and 3rd down each contain run/pass categories that read from left to right.

Here's where things diverge a bit from balance. Overall passing plays ruled over rushing plays by a 69/31% or 2.25-1 clip. If that's too much garbage for you, think that for every 10 plays on 2nd down, 7 of them were passes. The reasons being are two fold----that's the way Shotty called the game (I'm not being a smartass here---he showed this tendency early on the first couple of games regardless of down and distance). The other being the fact that the running game overall struggled a little bit to gain meaningful yardage on first downs---more on that when I get to 3rd down conversions. We are losing balance here and one of the things it can lead to are incompletions. Not an indictment on Sanchez, that's just the way it is, there's a greater chance of there being no movement of the ball at all when a pass is thrown.

The running game is non-existent. Now we have a pass-run ratio of nearly 9-1. So for every 10 plays on 3rd down, 9 of them are passes. Already I can see a few things. Down and distance really prohibited the ability to call a run. Think about it, would you run on 3rd and 6,7, or more? No, it's a losing proposition. A good back will average about 4.0-4.5 YPC, meaning on average they will come up short in these situations. Let's move on to 3rd down conversions and tie these things together.

I chose not to have a game by game breakdown, it's not necessary. With this category it's best to have a better sample size. So these numbers are the totals for the first four games. They are broken down as follows: left to right run/pass made and missed, 3rd and short (1-3 yards), 3rd and medium (4-7 yards), 3rd and long (8+yards). Again if you're having trouble reading these because of the flawed format, just jump to my analysis.

The Jets really struggled to convert 3rd downs. Out of 51 opportunities, they converted 15. That's about 29% folks which was near the season average of the last ranked Jaguars. So let's go one by one and remember, the longer the distance, the less likely it is to convert.

8 opportunities, 4 conversions. This is a decent percentage, I personally like to see a little bit higher say closer to 60%, but this isn't the problem here. It is also too small a sample right now to be able to say definitively whether or not the Jets passed more----the tendency right now points slightly towards that thought.

Look, I'll begin by reiterating that it's not smart to run the ball on 3rd and 5 or longer because on average, you will fail at a greater rate than if you passed the ball. Part of the 6-1 pass/run discrepancy really tells me that the Jets rarely faced a 3rd and 4, as this would be a more acceptable distance to rush. What concerns me a bit here, is that the conversion percentage for passing the ball is at 33% (1 in 3 will be converted) where it should be closer to 40-42% (2 in 5 will be converted). This will be something to keep an eye on as we progress through the season.

This is a no-win proposition on offense. You make it to this situation and it means you aren't consistently moving the ball on 1st and 2nd, and/or you are giving up sacks and penalties. Here we have 29 total opportunities, and you'd be very fortunate to convert these between 25-33% of the time (1 in 4 or 1 in 3). The deck is stacked against the offense. What I want you folks to realize that this situation comprised about 60% of the Jets 3rd downs in the first four games. This tells me what I said before, they weren't consistently moving the ball on 1st and 2nd and they did give up some penalties and sacks. Part of the reason was due to an inept running game on 1st down. Besides the Raider game which was effective (15 carries for 75 yards on 1st down), the Jets averaged about 2.6 yards per attempt. Couple this with Shotty's tendency to pass on 2nd regardless of distance (more chance for incompletions and therefore no yards), and sacks/penalties, and it's no wonder the Jets ended up with 29 3rd and longs in the first 4 games. That's 7-8 per game which is WAY TOO MANY. Something else to keep an eye on as we go forward.

The Redzone and some positives to build on

I was curious as to how many 3 and outs the Jets produced. and while they did struggle with consistency at times, they also had a relatively low amount of them. In the first 4 games, the Jets had 10 in 51 offensive drives. So we have about 12 drives per game, and about 2 will result in a 3 and out which is a reasonable number especially considering the fact that they struggled on 3rd down. This tells me that at times, they were able to effectively move the ball and even avoid 3rd down situations.

Finally let's get to the Redzone. And what I want you to keep in mind from here on out is 1) when the Jets get there are they scoring points? 2) Are they making the most of their opportunities by scoring TD's? Nothing to read here, it's all self explanatory:

1) When they get there, are they scoring points? Yes, 12 out of 13 opportunities or 92.3% of the time they are scoring. You want your offense to be in this range.

2) Are they making the most out of their opportunities by scoring TD's? Too early to tell. Ideally, you want to see your offense converting RZ opportunities at about a 2-1 clip (60-66%) and the Jets are a bit low here at this point in the season.

I wouldn't worry about that Baltimore game, that was just an ugly thing to see--it's one of the games I watched. Sanchez and the offense had no chance against that defense on that day, so for now let's chalk that up to being outclassed.

It's cool for me to do this for another team because I really don't have any prejudices or biases here. It's nice to be able to hear things from an outsider once in a while because it's easier for them to bring a fresh point of view. Anyway I hope you enjoyed my analysis and came away with something from it. If there's anything you'd like to see me look at or if you have any questions, tell me what I did wrong! Cheers GGN!