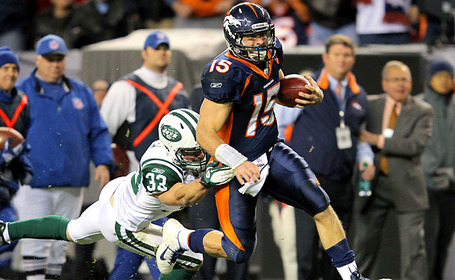 I'm going to start this off by saying I don't like the move for a few reasons, but this post will mainly be about the positives because I'm just not a negative guy.

First off I would have been more comfortable with this move around a 5th (with maybe a low conditional pick next year)...I think a 4th and a 6th is a bit steep because those are the pick which we could use to pick up talented bu raw players and build the depth we so sorely need. More after the jump..

The other negative is the Tebow factor. I would like this move a lot more if we picked up a guy with the exact same skill set not named Tim Tebow. I like many other Jets fans are worried Rex will cave into media/fan pressure to start Tebow if Sanchez gets off to a slow start. The fact of the matter is Sanchez is a better QB than Tebow and his job should in no way be threatened by someone with Tebow's skill. However because of his name and his following it very well could be.

Heaven forbid we have a hard first four games (Pats, Steelers, Huston, 49ers) a streak of dangerous teams which could very well have Sanchez preforming poorly. Then we switch him out for Tebow due to the outside pressures and he gets an easy stretch of our schedule (Fins, Colts, Rams) which has Tebow winning games and looking maybe half way decent. Then my friends we will have a full blown QB controversy on our hands when we really shouldn't. If we get to that point then by winning some easy games Tebow could single handedly be putting us in danger of setting our franchise back years by getting the FO to invest in him.(Okay maybe that is a bit of an over reaction but he has the potential to cause some serious problems that we really could do without)

Now for the good..Tebow is a pretty versatile guy who we could make some good packages for. What I would like to see us do with him is list him as a full back and teach him to play FB. He is a big bodied guy at 6'3 245 pounds, so if we can get him to get the blocking down we can leave him in all the time in our base power running O.

I think this is what Tebow really brings to the table that no one else does for us. WE can run wild cat plays from our base O giving us the element of surprise. Now the defense can obviously see we are running the wild cat and knows what is coming, with Tebow we don't give the D the advantage of showing our hand.

If (and this is a big and key if) Tebow cna be a decent enough full back on power running and blocking plays having him lined up in the backfield in the FB spot with Sanchez at QB and Greene/McKnight at RB really gives us endless options on what we can do from our base offense. We will essentially have a legit formation to ground and pound from, passing and play action, option, direct snap, you name it all in one formation, which all looks like the same package to opposing defenses.

Its going to be hell on defenses to figure out what the hell we are doing. Furthermore I think tis base formation will work much better for Sanchez as a QB then the 3-5 wide Schotty continually forced him to run. If tebow can get down the blocking of the FB position he will allow us to essentially have 2 QB and 2 RB with a FB in the backfield in a power run formation, which actually really excites me.

Like I said I was against this move and I feel that we gave up too much for him but if he can get down the FB position and the Jets are smart enough to use him like this we could be looking at one of the most dynamic offenses in the NFL with the potential to be down right explosive..I really can't remember the last time I said that about the Jets O. So lets hope they are smart enough to use him well and the gamble will pay off.