Some of you here may remember me because of a productive conversation we had just before our matchup last season, but the overwhelming majority of you have no idea who I am. Ok, I am a die hard fan of the Denver Broncos and I’ll spend more time following this blog now, hoping for you and your new QB to succeed, but when you face the Broncos. 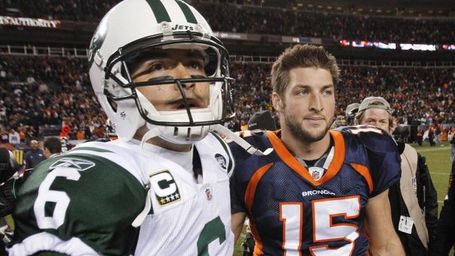 Althought this move was a bit confusing to understand and it made everybody think your franchise is clueless about the word "planning", I guess the NYJ are the perfect fit to land Tim Tebow. I know some fans like Mark Sanchez while others really hate him, but it doesn’t matter when you both groups think about the new dimension Tebow can bring for your team.

There’s no denying about the quality of the Jets’ defense. It’s one of the best (if not the best) in the NFL right now. With this excellent defense dominating this side of the ball, all you need is a good rushing attack to battle for field position and to control the clock on the other side of the ball. The threat that Tebow provides will instantly upgrade your ground attack to a high level and make you real Super Bowl contenders.

The more you run the ball, the more the defenses will try to adjust to stop it, stacking the box with 8, 9 and maybe 10 players. While Tebow isn’t a great pocket passer (and will never be), his best % accuracy is when he makes these deep bombs. The Broncos won several games this way last year. And remember we did it without having a defense like yours to dominate the opposite team. You’ll be able to control the clock, stop the opposite offenses (as usual) and also put enough points to win the championship.

So buddies, take care of Tim Tebow because he is a great athlete, leader and winner. I consider this trade a steal by you, and possibly the worst trade ever by my franchise. Take advantage on that! As I said above, I hope to be around more often for us to talk about football and wish you luck with Timmy at the helm, but when you play the Broncos.

What are your thoughts about it?

What do you think about Tim Tebow in NY?