Let's break down Greg McElroy's touchdown... hopefully the first of many.

This play was nothing special; it's something we've seen Mark Sanchez and a million other quarterbacks do. The reason I'm highlighting it is because it was Greg McElroy's first career touchdown, and if he's the new starting quarterback of the New York Jets, it's the beginning of an era. 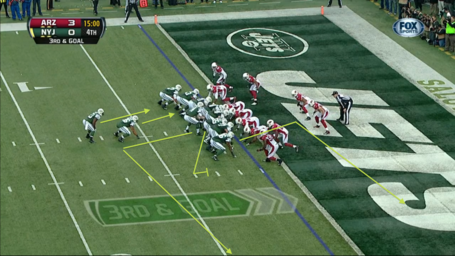 This is a basic jumbo goal-line formation. Also known as a "heavy" formation. There are three tight ends and two running backs. It's a little difficult to see numbers, so on the top you have TE Konrad Reuland and OT Jason Smith on the strong-side (left) next to LT D'Brickashaw Ferguson, indicating that they are likely running the ball in that direction. On the bottom, TE Jeff Cumberland is the extra weak-side blocker next to RT Austin Howard. In the backfield you have FB Lex Hilliard and RB Shonn Greene.

It's third-and-short, the run game has been working all drive long, and all indications are that the Jets are about to run it over the left side of the formation. 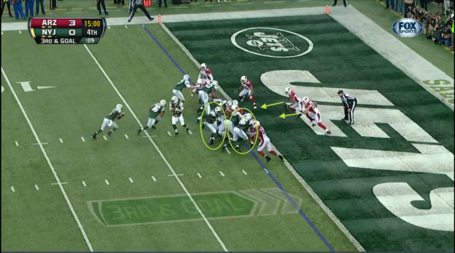 The ball is snapped, and McElroy goes to hand the ball off to Greene, who looks to be running to the left side, just as someone would normally expect. Everyone, including the linebackers in the back, begin to rush in to stuff Greene before he can cross the goal line. Take a look at RG Brandon Moore, who begins to pull from his normal position to seal the edge. You might want to look at the original picture to see his route. He's going to stuff #54, coming off the right edge. Next to him, Cumberland is chipping CB Patrick Peterson before going out on his route, which you can see in the original picture. 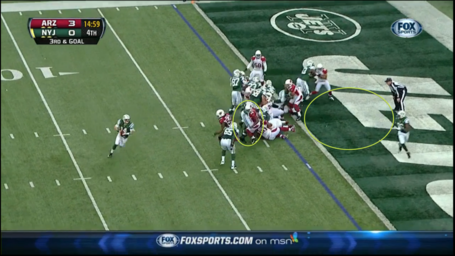 The execution is absolutely perfect. Moore has stymied #54 enough that McElroy has a clean path to roll out. Look at how much space Cumberland already has. There's nobody near him. Everyone bit on the fake. Peterson, circled, realizes they've been fooled. 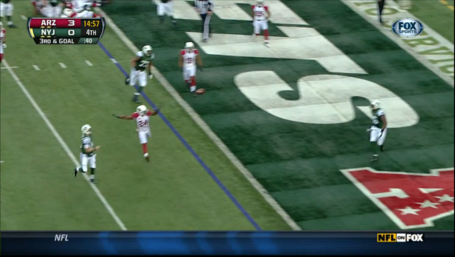 Obviously, wide open pass, and McElroy feels Peterson bearing down on him, so he throws it to Cumberland. He probably could have scored by running it, but it doesn't really matter. 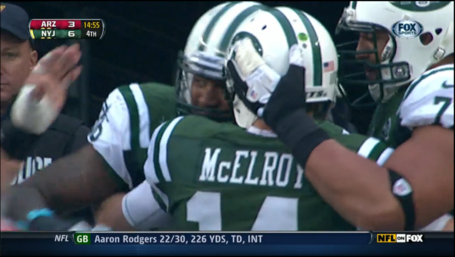 So, that's the play. Like I said, very straightforward, nothing special. Perfect execution. Hopefully, this is the beginning of a beautiful McElroy-filled era.