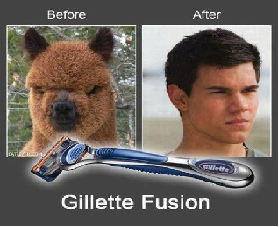 We are back with our weekly post sponsored by a company that is not only a beacon for all razor companies, not only a symbol of American exceptionalism , but a company that is an inspiration to the human spirit in general. I am talking about Gillette, the best a man can get.

This week, Gillette asks on its Facebook page who this year's offensive MVP is. We will do more than that. SB Nation's NFL team bloggers have voted on NFL awards this year. Results are below.

Below is how I filled out my ballot with explanations.

Manning has absolutely carried Denver into contention. He missed a year and just went back to being the best quarterback in the NFL.

A lot of people use this as a consolation prize for somebody who doesn't win the MVP. I don't. Again, Manning's offensive exploits have the Broncos as legitimate Super Bowl contenders for the first time since 2005.

I'm not sure I've ever seen a defensive player as intelligent as Watt. He's a dynamic pass rusher with 20.5 sacks. That alone is enough to merit consideration. His play goes deeper, though. When he knows he can't get to the quarterback, he gives up on his pass rush and moves himself into throwing lanes to knock passes down. It is another way a defensive lineman can impact a pass. He has knocked down 15 passes.

Andrew Luck's numbers are great for a rookie. Robert Griffin III's numbers are great for anybody. I'm not sure anybody saw him taking the league by storm like this. Russell Wilson deserves consideration, but Griffin got my vote for two reasons. First, he's made what had been a dysfunctional franchise relevant for the first time in a decade and a half. Beyond that, Griffin had enormous pressure on him. He had to go in and lift his team on his back. The Redskins mortgaged their future to get him. If he had failed, it could have set them back a decade. Instead, it looks like they are starting a golden age because of how they hit on RG3.

It's really tough to take over as head coach of a new team in the offseason. At least then you have time to plan out what you are going to do. Arians had to take over as a head coach on the fly. His team had to deal with the emotionally devastating illness of its head coach. On top of this, the Colts were supposed to be one of the worst teams in football. Arians got them to the Playoffs. This was one of the great coaching jobs of all-time.

The Seahawks suddenly look like they are going to contend for a long time. It has everything to do with Scheinder's Draft. He went against the grain and took Bruce Irvin in the first round when few put a first round grade on him. Irvin leads rookies in sacks. Second round pick Bobby Wagner looks like a stud at linebacker, and to top it off, Schneider got a franchise quarterback in the third round, Russell Wilson.

May Gillette be with you until we meet again.