Mark Sanchez came to New York as the saviour, the quarterback that would lead the Jets back to the promise land. After a combination of Favre and Kellen, hopes were high......how did we get to this point?

Share All sharing options for: Mark Sanchez - How Hope Turned To Despair!

When Tim Tebow was traded to the New York Jets this off-season, everyone knew that we would end up talking Quarterbacks throughout the year. Of course that's exactly what we are doing, and the Quarterback position has been the hot subject in New York for several weeks, you could say since the day Tebow arrived. However this isn't about Tebow, he has been a non-factor and right now he is the 3rd most talked about Quarterback on the Jets. How did Mark Sanchez fall from grace? and is there anyway back?

Mark Sanchez was the top rated Quarterback coming out of High School, so naturally he was all over ESPN and his commitment to USC was met with great media attention. He had his ups and his downs, being accused of sexual assault, being disciplined by the team for underage drinking and using a fake ID. All those issues made ripples in the college football ocean but I personally didn't pay attention to him until he threw four touchdowns against my Irish in 2007 in a very embarrasing 38-0 loss. However his season was full of ups and downs, mistakes and game changing plays. Largely filling in for John David Booty who experienced a broken finger, Sanchez finished the season with 695 yards, 7 touchdowns to 5 interceptions.

Mark experienced a fantastic 2008 season, leading the Trojans to a Rose Bowl victory, his 413 yards passing ranked 2nd in Rose Bowl history and he was awarded the MVP award. Sanchez completed a season on a team full off offensive and defensive talent with 3,207 yards of passing, 34 touchdowns to just the 10 interceptions. A very impressive season and Sanchez showed a lot of confidence and maturity for a Quarterback that had very limited playing experience.

The important thing to remember here is Mark had a perfect oppurtunity to return to school and really refine his ability at the position. USC were going to stay competitive and he has the coaching set-up and comfort to gain playing time and earn the extra reps. Pete Carrol disagreed with his decision to enter the draft, it was understandable given his limited playing time and the success rate of Quarterbacks making the leap early.

2009 consisted of a very weak group of Quarterbacks, Sanchez wanted to take advantage of this and make the leap to the pro's. His upside alone made him a first round selection, his board sessions with teams and lack of elite talent at the position in the draft made him a top 15 selection, the Jets made him a top 5 selection. The simple fact was they were smitten at the very start and there was only ever one team he would end up with, Rex commented the day after the draft:

"There had to be 20 receivers there that were volunteering," Jets Coach Rex Ryan said. "That says something about this young man, the type of person he is. Guys were coming out of the woodwork to run routes for him. He’s got that kind of leadership. We saw the great feet. We saw the poise and how confident he was."

It almost seems funny now to read the scouting reports about Mark Sanchez, draft analysts the country over were drooling over his accuracy, his ability to move his feet and throw on the run, his poise and confidence in the pocket. I think this perfectly illustrates how one year is simply not enough time to get an accurate read on a player, and how college football is compltely different to the pros, it's hard enough to judge with 3-4 years worth of film, let alone a single season and a handful of games.

So it came about the Jets wanted Sanchez, they traded their 17th overall selection, their 2nd round selection, defensive lineman Kenyon Coleman, safety Abram Elam and quarterback Brett Ratliff to the Cleveland Browns for the 5th overall selection. The next moment we are looking at Sanchez with a smirk on his face pulling on a New York Jets hat, the selection received a mixed response from those Jets fans in attendance, personally I wasn't booing but I certainly wasn't cheering either:

2009 was a season of great encouragement. For Sanchez he came in and said all the right things, he showed up to work and his team mates seemed to respond to his passion. His 2009 season was by no means a success story of epic proportions. The Jets asked him to do very little, instead relying on the #1 ranked rushing attack and the #1 ranked defence.

Sanchez had his good games, starting against Houston, New England, and against Carolina he had his highest completion % game with 76.5%, however he also had his stinkers which set the alarm bells ringing. He completed 34.5% of his passes and tossed up 5 interceptions. He threw 3 interceptions against New Orleans and Atlanta and four interceptions against the Patriots. In total he put up 20 interceptions. We reminded ourselves that Peyton Manning had also got off to a rocky start and it was all down to the growing process.

We saw enough to warrant patience for his development. We argued that he had limited experience starting and that he was growing into the roll. He munched on a hot dog in Oakland during a 38-0 victory. it wasn't a mark of disrespect, it was a young Quarterback adjusting to the league. We came up short and we were confident we would be back, with a Quarterback one year on with one years worth of experience under his belt. 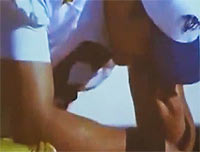 Mark Sanchez has a munch during the game in Oakland (via 4.bp.blogspot.com)

2010 was a better year for Sanchez, although it was in 2010 when we first started to question his ability to deliver the football accurately. He has his moments against the Patriots, Browns, Steelers and Bears but he also has his problems against the Packers and Patriots and completing just over 38% of his passes against the Dolphins. His interception on the final drive against the Bears cut short any chance of clinching early. However if his fortunes had taken a downturn during another up and down season, they were about to reach sky high.

In the 2010 Divisional match-up agains tthe Patriots, Sanchez climbed to the highest point in his short career. A high point that he was never able to retain. He passed for three touchdowns, including a touch pass to Holmes in the corner of the endzone that was among one of the best throws I've seen from Sanchez throughout his career. He played with passion and on the back of an inspired performance the Jets recorded one of the most famous victories in their history.

Despite the Jets returning to the Championship game, they were unable to progress to the big dance. Despite a spirited Sanchez half time team talk, the comeback effort against the Steelers was in vain. Despite what many said, Sanchez had only increased his completion percentage by 1%, however he had thrown 7 less interceptions. Although 33 interceptions in two seasons was nothing to shout home about. The bigger concerns came not from his stat line, but from the lack of improvement he made in reading the game. At the end of the season, there was still hope, but there was still a lot of trepidation too.

2011 was the year when things started to unravel. Sanchez was criticized by annoymous team mates about his work ethic, the discontent in the locker room could not be controlled as players became frustrated with the lack of efficiency in game management and especially the passing game. Sanchez continued to struggle with his accuracy often missing wide open receivers and throwing into double and trple coverage. Fans began to question his ability as a starting quarterback.

His play towards the end of the season did nothing to promote confidence within the fanbase, he tossed up interceptions in his final three contests. Watched as a heated argument in the huddle in Miami resulted in Holmes being benched and the Jets promising season ending in a whimper. He threw three interceptions and perhaps the most disconcerning, he didn't look all that bothered.

We started to notice that when he struggled, his head went down. He didn't seem to have the desire that he once had, he no longer looked like the quarterback with all the tools lacking in experience. He looked like a quarterback with limited tools and no desire. We can't simply blame Sanchez in relation to his struggles, the play calling was at best questionable and the 2012 team is lacking talent at the positions of need. However we can't ignore the fact that Sanchez looks like a deer in headlights when faced with pressure. He continues to lock onto receivers and if defences disguise their blitzes and coverages he will often fail to read the danger and throw passes into impossive coverages.

On occasions he just won't see a wide open receiver:

Before the 2012 season he was awarded a contract extension, for reasons only Mike Tannenbaum knows. He has consistently been one of the worst performers at the position and he was guaranteed $20.5 million over two years. Unnaceptable cap management that will handicap our ability to start re-building with another quarterback at the helm.

He was benched for the first time in his career, and although this article will run after the Jacksonville game....(wrote before), his performance there doesn't matter. He doesn't perfom it's the final nail in his coffin, if he does...well you should, it's the Jaguars.

Let me just state that I don't believe the Jets have made things easy for Sanchez, they haven't provided him with a coach who has any track record of developing a Quarterback. They didn't provide a suitable back-up to push Sanchez and they didn't hold him accountable until week 12 of his 4th season. There are a million things we could have done better, but Sanchez's lack of development rests on his own shoulders.

Mark Sanchez is a quarterback who will always say the right things, however the time for talk is over. We don't want to here how he is going to work hard to improve, or how he is improving every single day and it's only a matter of time until it translates to the field. Sorry Mark it's too little too late.

We had some good times Mark, we really did. However now is the time for us both to go our separate ways!