Is it the quarterback or surrounding talent?

One thing we hear frequently about Mark Sanchez is how he lacks a good supporting cast. One player he is frequently compared with is Matt Ryan of the Falcons, a young quarterback with a superb supporting cast loaded with talent at the skill positions.

Is it the talent? Well, part of it but not the whole thing. Take this play from Thursday's Falcons-Saints game. 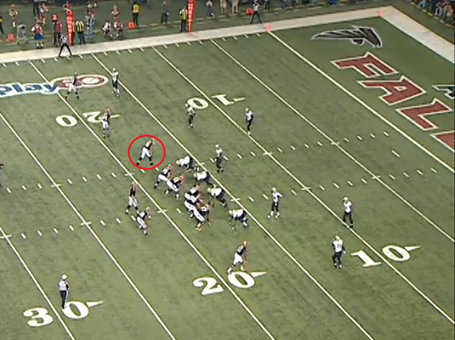 Life is good when you are a quarterback in the red zone, and your first read is Tony Gonzalez. Such is the life Ryan lives in Atlanta. 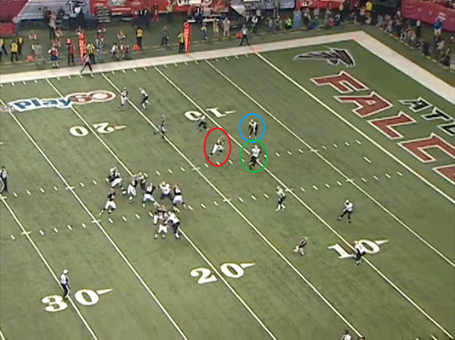 I have heard some people say Ryan locks onto his receivers like Sanchez. To the naked eye, it appears that is what he is doing here, but that isn't really the case. Gonzalez is his first read, and Ryan can see what is happening. He is going to burn Curtis Lofton (green), and safety Roman Harper (blue) is late in coverage. His first read is winning his matchup. This is totally different from locking onto Clyde Gates as Sanchez does, staying with him, and throwing him the ball even when he is covered. 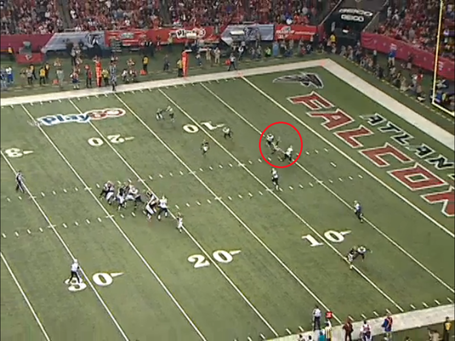 This is where Gonzalez is when the ball is thrown. 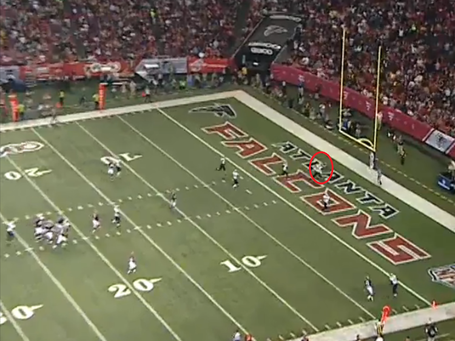 This is where Gonzalez is relative to Lofton when the ball is caught.

This play only works because Ryan identified the coverage and saw he had the advantage. It only worked because he saw that Lofton in coverage was facing backwards and would not be able to see the throw to make a play on it. It only worked because Ryan pulled the trigger at the exact right moment. If he throws a split second too early too early, Harper can jump the route. If he throws a split second too late, Gonzalez runs out of room, and Lofton can recover. It does not work unless Ryan throws an extremely accurate ball into a very tight window. If that ball is even a little off, it either hits Lofton in the back or head or goes over Gonzalez' head.

Yes, life is good when you have Tony Gonzalez in the red zone. But Gonzalez's ability to win his matchup goes to waste without a quarterback who can do all of the things mentioned above. In the NFL, this is what passes for a receiver being open. There aren't a ton of cases of a wide receiver running wide open. In most cases, even when a receiver is open, you need the quarterback to recognize it in a very short time, throw at just the right time, and place it perfectly to take advantage.

When you watch the Jets, there are similar plays to be made. There aren't as many as Ryan's receivers get him, but they are there. Sanchez isn't making them. He either isn't reading the coverage correctly, throwing late, or throwing inaccurately.