The quarterback is making poor reads before the snap.

Share All sharing options for: Mark Sanchez Protects Himself Poorly

When the quarterback gets sacked, usually blame gets thrown on the offensive line for not blocking properly. Quarterbacks, however, are a lot more responsible for their protection than people realize or are willing to admit. Part of it is what happens after the snap. Sometimes you need to feel the pressure and make a subtle step up or to the side to buy some extra time. There is another, perhaps more important area, where the quarterback is responsible for keeping himself up, what happens before the snap.

Why is Peyton Manning the master of quarterback play? There are many reasons, but one thing he does separates himself from every other quarterback in the NFL. He knows everything the defense is going to do before the defense does it. He looks at your front. He notices something as subtle as your outside linebacker taking two steps to the right before the snap. He knows your play. He changes his into something more favorable. He has you.

Remember how Rex Ryan said Manning studies film better than Tom Brady in the 2010 Playoffs? Rex wasn't just trying to create headlines. Manning is the master of the film room, and that makes him a master on the field. There's a reason Rex's defenses have given so many quarterbacks problems while Manning has dominated them. Rex throws a ton of unique looks at other quarterbacks. These looks are so complex that most quarterbacks can't figure them out. Manning is so smart that he can.

And this is critical. If a quarterback knows what the defense is doing, he can adjust his blocking at the line to counter the pass rush. He can make sure his team is running the correct hot route. (A hot route is a changed route designed to get the ball out quickly to counter the blitz. If the other team is bringing six and you are only blocking five, how do you beat the blitz? You throw quickly before the blitzer gets there into the vacated spot of the field where the blitzer was standing before the snap.)

When I watch the Jets on film, it is alarming how frequently Mark Sanchez fails to see what the other team is doing before the snap. As much as people get on the offensive line, this is a huge part of the problem when it comes to protection. People say, "How can Sanchez be expected to play well when he's not getting protection," but Sanchez is a huge part of the problem when the protection is bad. Nobody is Peyton Manning. I'm not expecting Sanchez to know every single thing the defense does. But he might be the worst in the league from what I've seen adjusting at the line.

What this probably means is either he's either not putting in the work in the film room or he just can't grasp essential concepts for playing his position successfully. I'm not one to question his work ethic even though there were some rumblings a year ago about it. That kind of stuff is subjective. You see it in your own job. There are some people who accomplish more in the office in four hours than others who work for eight hours. Beyond this, I see things that suggest the second is true, Sanchez just doesn't get what he's seeing. Let me show you an example from last year.

Let's go back to a game that took place almost a year ago, Jets-Pats Week 10 at the Meadowlands. 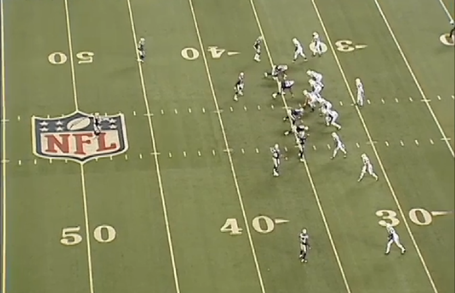 The Jets split five wide on this play. That means if there's a blitz, the ball has to come out quickly. 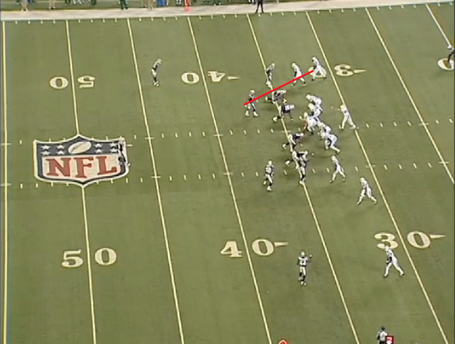 Sanchez sees Jerrod Mayo move and points him out. LaDainian Tomlinson is now going to run a hot route into the space Mayo will be vacating once he blitzes, and protection will slide to the right since that is where the blitz will be coming from. 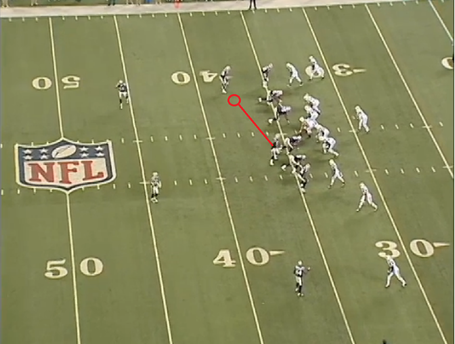 The problem is the Pats disguised their look. They have Sanchez caught. After Sanchez makes his adjustment, Mayo moves from the circle to his right. The Jets are caught in a horrible play, and Sanchez doesn't recognize it. He makes no additional changes. 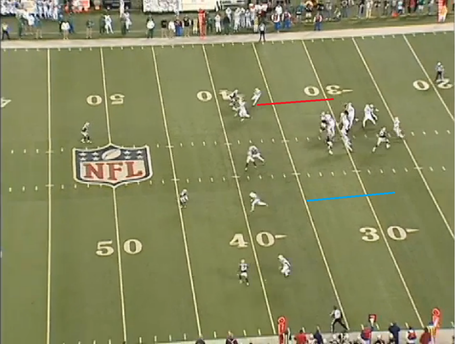 You can predict what happens next. Because Mayo changed his side, Tomlinson is running his hot route into an area that is covered, which is in red. Sanchez is locked onto this area. The blue area is where Mayo vacated. That is where the hot route should have been changed to for Dustin Keller. Because Sanchez adjusted his blocking to move to the right, now that the Pats have overloaded the left side with a blitz, D'Brickashaw Ferguson is left alone to block both Mayo and Andre Carter. Carter ends up getting a free run at the quarterback and comes up with the sack.

People get on the protection. This sack went on Ferguson as evidence of the "bad" year he had in 2011 giving up so many sacks. In reality, it was 100% Sanchez's fault, and this becomes a theme the more you watch Mark.

Why is Mark Sanchez so disappointing? People note the accuracy issues. They note how he struggles to read a defense. This is all valid. But the issues unfortunately do not end there. He regularly puts himself into situations like the one above where he is under pressure through the fault of nobody but himself. That's a bad thing when one considers how bad his numbers are once he faces pressure.

People see Sanchez light it up at times and wonder why he can't always do it. There are many reasons, and this is one. There are times where the offensive line will play incredibly. There are times the Jets face defenses that do not show a lot of looks whose pass rushing schemes are easy to figure out. But it doesn't happen enough in this league for a quarterback to be consistent when making pre-snap reads as poorly as Sanchez does.

And this is the kind of thing that makes me feel Sanchez cannot be salvaged. I can understand what happens on film, but that doesn't qualify me to play quarterback in the NFL. I might see it on film, but there's no way I could diagnosis what a defense is doing as quickly as a quarterback needs to do. It goes beyond coaching too. There isn't a coach alive who could make me get those reads as quickly. I'm not making eight figures in salary from the Jets, though. Sanchez is. He also cannot diagnose what is happening quickly enough. The clip might have been from last year, but you'll have to trust me that these issues have continued into 2012. If he hasn't figured it out in four years, there isn't much to suggest he ever will.