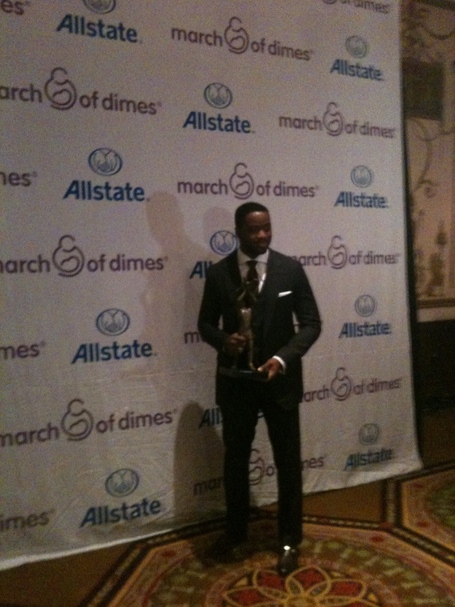 Curtis Martin needs no introduction, but I will give one anyway. The 2012 Hall of Fame inductee ran his way into the hearts of Jets fans from 1998 to 2005. Only three men in NFL history have rushed for more yards. He made five Pro Bowls and five All Pro teams. He led the NFL in rushing in 2004. Beyond that, he carried himself with dignity. He never did anything to draw attention to himself in a negative way. He carried his business humbly. He thrived playing through injuries that would have kept most others on the bench.

As great of a player as he was on the field, he is just as great off the field. Today, he was honored as Sportsman of the Year at the annual March of Dimes Sports Luncheon at the Waldorf-Astoria in New York.

I had the chance to speak with Curtis. Our conversation is below.

John B: Could you talk a bit about what it means to you to win this award?

Curtis Martin: It's a tremendous honor because to me it's one of the most important things in the world, which is giving people a chance at a healthy start to life. I applaud the March of Dimes for their efforts and feel privileged and honored to be associated with them.

JB: How difficult was it to be as open and honest as you were about all of the adversity you have gone through in your life during your Hall of Fame speech?

CM: You know something? It was probably one of the least difficult things I could have done because when you are telling the truth, that's easy. I'm not good at fabricating anything. I'm actually not even good at prepared speeches that aren't dear to my heart, and that was a time where I didn't prepare anything. I had a lot of different thoughts and a lot of different approaches, but I didn't decide until I got up there that I wasn't going to look at any notes, and I was just going to speak from the heart.

JB: What led you to choose Bill Parcells to present you?

JB: What is the most important lesson he taught you?

JB: What do you think the best moment of your career was?

CM: Retiring and not feeling as though there was anything else I could have done.

JB: If you could give away the personal accolades like the records, the rushing title and the Hall of Fame and have won a Super Bowl with a less distinguished career, would you?

CM: No, when I think of personal accolades, I think about all of the relationships that I formed, the teams I played for, the owners I played for. I wouldn't change anything about my career. Of course, I wanted to win a Super Bowl every single year I was on that field for every team I was part of. That was my goal every single year, to be the best, but I wouldn't trade the career and the relationships that I've been able to have for anything, not even a Super Bowl.

JB: As a player, you were known for being somebody who would not only play hurt but as somebody who thrived playing through injuries that would have kept most other players on the bench. Can you talk about how you were able to do that?

CM: I've learned to thrive from pain. I've always recognized in the midst of pain there is an opportunity to conquer it so I thrived on conquering pain from injury to injury. At the end of the day, I think that's what made my career what it was. There are so many instances where I needed surgery. I still need four surgeries, but those could have been four different years I didn't play.

JB: Do you have any message for Jets fans out there?

CM: Keep the faith. Every year isn't going to be a championship year. It isn't always going to be the best year. You're going to have years like this, but there's still hope. I'm still hoping the Jets can turn it around and salvage the season.