Our Information on @Steiny32

Share All sharing options for: Our Information on @Steiny32

For months, many people have been wondering who is running the Twitter parody account of The Jets Blog writer Jake Steinberg. This article will contain no accusations. It will only contain evidence compiled by GGN of whom might be behind it. You can decide for yourself whether this is sufficient evidence.

Fake Steiny himself correctly guessed our first piece of evidence. Last Friday, Fake Steiny made an identical Tweet to Rich Cimini at the exact same time. This wasn't a retweet. He used the exact same language, and these were posted within a minute of each other. 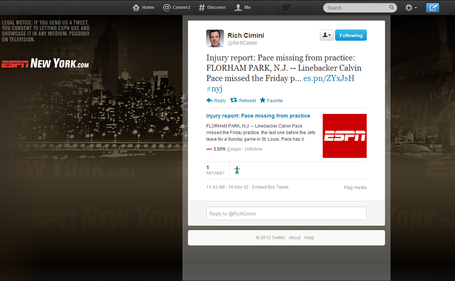 Fake Steiny today Tweeted that he did this on purpose to throw people off, and I took the bait. That might be. There might be no connection here. He might have been continuously checking Cimini's Twitter page for some reason and then posted the instant he saw an article. This evidence alone is highly circumstantial.

That's not where this ends, though.

As it turns out, I was not the first to find this. I have learned an extremely reliable source that he noticed this same thing days before I did and posted a quick Tweet of his own saying Cimini was Fake Steiny.

Within minutes, my source was contacted by Fake Steiny asking him to take his Tweet down. He also said, " The Jets don't know who I am and I they are pretty pissed. So I would prefer to keep my identity quiet." He then discussed negative feelings about "other beat writers." Again, this is in reference to a Tweet that said Cimini is Fake Steiny. I have viewed evidence of this exchange, and it is real.

Interesting also is Fake Steiny's behavior after I reached out for contact mentioning the similarities between the Tweets.

He complained that he couldn't believe it was going to end like this.

Then he went on a Tweeting spree with some of the Tweets you saw in the previous article and changed his Twitter handle to @Jets_f9r49gjro, which is also now gone. You can currently find the handle @Steiny55. 55 is Ricky Sapp's number. Fake Steiny makes fun of Jake Steinberg's support of Ricky Sapp.

Here are two Tweets from today.

I am sorry & never meant to hurt anyone. Pls dont run the story it will hurt innocent ppl. I beg 4 forgiveness. grant this & i will go away.

There you have it. I was set up. He set me up on wild goose chase. He wanted me to find all of this fake evidence and file a false report. Then once I am set to file said false report, he begs me not to stay on the case.

But nothing I have said here is false. I make no accusations. I only present what I have collected and been able to verify. You can judge for yourself.

It is interesting to note the lengths Fake Steiny took today with this confrontation compared to others. Back in September when somebody allegedly went to the Jets and got his true identity wrong he Tweeted:

To the person the turned me in to the Jets there was only one problem. You turned in the wrong person. You are wrong.

He did not change his account handle when the wrong person was identified. He did not beg for it not to happen. He did not talk about how unfair it was for that person. He simply laughed.

Why should you care? Why does it matter? After all, it’s a parody account that this guy does in his spare time. Well, for starters, the Jets through Bruce Speight have apparently warned the beat reporters to cut it out before, and Fake Steiny laughed it off. He then expressed concern to my source that the Jets would be extremely upset that he’s continued to do it.

Furthermore, Fake Steiny has continually mocked his colleagues and an 18-year-old college freshman that just wanted to express support for his friends that play for the Jets. It takes a certain kind of character to do this under the guise of what essentially amounts to an anonymous source.

It's interesting to note that Fake Steiny has been in touch with agent Howard Shatsky. You might remember Shatsky as Kenrick Ellis' former agent who got into a Twitter fight with Cimini after the 2011 NFL Draft for an inflammatory Cimini Tweet.

Fake Steiny, whoever it is, seems to not be a fan of Manish Mehta:

This was a Fake Steiny comment about ESPN's Jane McManus:

And here are some of the things said about Jets players and mocking the 18 year old Steinberg:

For his part, Fake Steiny commented, "This account is not being run by Rich Cimini. Rich in no way has anything to do with this twitter account."

Brian Bassett of The Jets Blog offered the following comment, "I don't possess direct knowledge, but there's evidence it's a member of the press. I'm around the Jets beat very infrequently, but it doesn't take much time to get a sense just how dysfunctional it is as a group -- so much so that someone would waste time making fun of genuinely good people. Even if they try and couch it as 'just in fun,' the person responsible for the account spent a preseason gameday tweeting over 70 times rather than doing their job, that tells me all I care to know."

Jake Steinberg of The Jets Blog said the following, "I understand why parody accounts exist and honesty found some of the Fake Steiny32 tweets witty and amusing. However, why on countless occasions was it necessary to continue to wish ill and demean good people who are training and praying everyday for another shot at the NFL? Why is it necessary to demoralize hard working athletes on the team that are just trying to support their family while he continuing to pursue their lifelong dream? Most importantly, why is it necessary to hide behind a parody twitter account in order to express your true feelings when you have one of the largest forums at your fingertips. Remember, Fake Steiny you are a journalist. You are being paid to freely express your observations and views. #whyhide??"

In our Jets community, it is noteworthy that an 18 year old kid has developed the relationships that Jake Steinberg has, and we are all watching him follow his dreams while he reports the latest on our team. Of course, our desire for this guy to succeed is what makes the anonymous nature of the parody Tweeter interesting, and what makes his actual identity newsworthy. Please note that I have no personal relationship with either writer and that my only goal here is to share information with our Jets community.