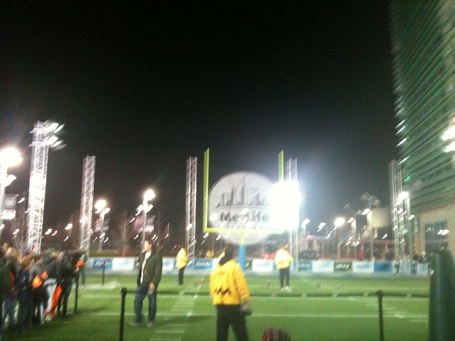 Prior to Thursday night's meltdown, MetLife and the MetLife Foundation as part of a string of events that will raise $100,000 for local food banks over the holiday season sponsored a field goal kicking event where fans could attempt field goals to raise money for charity.

Phyllis Dunlop, Vice President of the Community FoodBank of New Jersey said, "This is so great. It's so much fun to be out here. We are so grateful to MetLife and to the Jets for doing this. It's so much fun to watch people try to make a field goal. It's something they think is really easy to do, but it's not.

At the end of the event, former Jets kicker John Hall made a field goal to double the amount raised. Hall kicked for the Jets from 1997 to 2002. His 53 yard field goal in Oakland on the last week of the 2001 season to put the Jets into the Playoffs lives in team lore. Before John tried his kick, he was kind enough to speak with me for a few minutes about his career, life after football, and the current state of the Jets.

John B: Could you talk about this event a little bit?

JB: What are you doing now in your post-playing days?

JH: I'm a dad, a soccer coach, a realtor, a hurricane worker, all kinds of stuff. I keep busy.

JB: You played for two legendary coaches during your career, Bill Parcells and Joe Gibbs. Could you talk about some of the similarities and differences between them?

JH: The similarities are that they both were very prepared, smart, intelligent guys, very capable of dealing with grown men, leading them. The differences are that Joe Gibbs was a bit more relaxed. Parcells was very direct, which I appreciated. I enjoyed playing for both coaches. Both are legends. I was just really blessed to be able to play for them.

JB: What was the best moment of your career?

JH: It was playing against Oakland in 2001. We had to win that game to go to the Playoffs. It came down to a long field goal at the end. We went out there, and we got it done. When the clock struck zero, we had more points than they did to make the Playoffs.

JB: What was going through your mind before that kick?

JH: Just make it. Just do everything you've been doing all year in practice. It wasn't hard at all.

JB: What is the one thing that would surprise people most about the kicker position?

JH: Being out here today watching a lot of people try to make a field goal, they don't realize how tough it is. A lot of people joke around about kickers, and there's nothing wrong with that given that we don't practice as hard as everybody else. But it's a difficult thing to do. We do work hard at that.

JB: Can you talk a little bit about being a player for the Jets right after the 1999 season when Bill Parcells retired, and Bill Belichick resigned after one day as his replacement?

JH: That was really strange. We had a good end to the season. I think we won six of our last eight with Ray Lucas as our quarterback. We were feeling pretty good about ourselves. We got through the injury to Vinny Testaverde and some really bad times. We were excited at the end of the season thinking about next year. We really built something here. We weathered the storm. Then we were shocked Bill (Parcells) was gone. I understood. That's his decision. He gave me my opportunity. I'll always be grateful. I'll always be supportive, but it was really weird the way it went down. Then there was Belichick being named coach when he didn't want to be named coach because of the way it happened. He wasn't courted. I guess that's what it was. Them sticking Al Groh in there was kind of tough. But we're professionals. Our job was to show up and work, and that's what we did.

JB: Could you talk about about Mike Westhoff having played for him?

JH: He's a wonderful coach. He's so prepared. He analyses so much tape and has so many ideas about how he can exploit the other team's weaknesses. I really enjoyed playing for him. I played against him four or five years when he was with the Dolphins. Even then, I had a lot of respect for him.

JB: How many games do you get to?

JH: I get to about one every two years. It's tough. It's always great to be back, though. The last time I was here was for Minnesota, a Monday night game in 2010, and that was a lot of fun.

JB: Are you active within the Jets organization?

JH: Not really. I still have so many great friends here, though, in the video department and all around the offices. I still keep in touch with Brian Mulligan (Director of Events and Game Operations) and a lot of others. You know you can always call them up, and they'll listen. I have a lot of friends.

JB: What are your thoughts on the current state of the team?

JH: The NFL is tough. It's a long season. You just have to keep plugging away. Obviously, not being in the locker room, I can't really speak for what is going on in there. They're all professionals. They're showing up and doing the best they can.

JH: I don't know if I want to touch that. There are so many different things you can say. I support both. I think Tebow gets criticized a little unfairly because he's not a great practice player. Then he gets in the game and makes things happen.

JB: Do you have any message for Jets fan?

JH: Keep your heads up and be supportive. They're doing the best they can. They've had some injuries and things go wrong every team does. There are twists and turns to the season. Bounces go different ways. You just have to keep going until the end.