Both CBS and FOX have a doubleheader on the final Sunday of the NFL season as custom dictates.

Jets at Dolphins early on CBS

Panthers at Saints early on FOX

Chiefs at Broncos late on CBS

Buccaneers at Falcons late on FOX

The vast majority of the country is going to see the Jets today. If your local team is not playing in the same timeslot, this is the game you get. 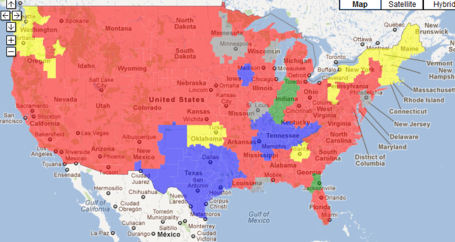 People living in red areas and Alaska get the Jets.

CBS also made the decision to show New York Tebow(!) instead of the critical Baltimore-Cincinnati game. The Denver game does have significance but not as much as the Ravens and Bengals. That is a truly awful decision.

The entire nation will see Cowboys at Giants tonight on NBC. There is no Monday Night Football in Week 17. The Playoffs start Saturday, and the league does not want teams to have to prepare for the postseason on a Monday-Saturday short week.