I would like to take a look back at Darrelle Revis' interception in the final minute of Sunday's game and figure out what happened. A lot went right for the Jets and a lot wrong for Dallas aside from Tony Romo making a really dumb throw. 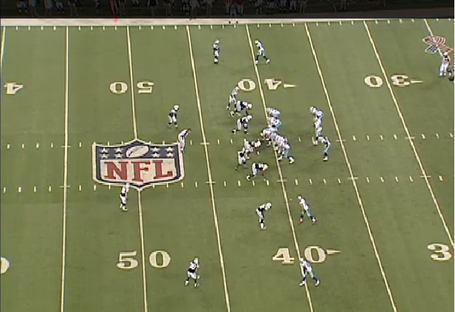 The Cowboys come out with three receivers. Two are to Tony Romo's left. One is to his right. Jason Witten and Felix Jones are next to him in the backfield. The Jets have seven defensive backs in the game. They are going to play cover two on this play. Jim Leonhard will be responsible for taking any man deep on the right side of the defense. Brondey Pool will be responsible for any man deep on the left side of the defense. The Jets disguise it a bit, though. Look how much closer to the line Pool is as the deep safety on the left side than Leonhard is on the right side. It does not look like Pool is going to be playing deep. 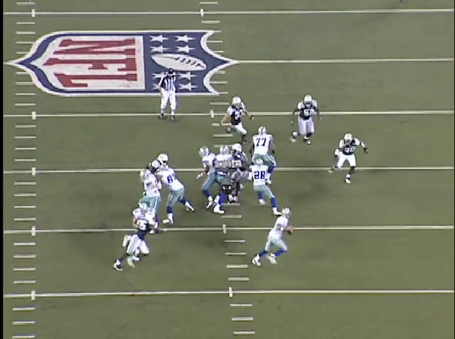 The Jets only rush four, but I think the Cowboys blocked this play very poorly. Tyron Smith blocks down on David Harris, who lined up near the middle of the defense. That meant Calvin Pace, who lined up at end was left to tight end Jason Witten, who lined up on the right side in the backfield. Felix Jones sees this is a bad matchups and leaves the left side of the backfield to help Witten on Pace. This is a problem for Dallas, though, because Jamaal Westerman beats Doug Free clean around the edge on the left side and forces Romo to roll right. If Smith blocks Pace there, Jones does not have to go help Witten, and he can help Free on Westerman. This is very important because, remember, the Cowboys only have one receiver, Dez Bryant, lined up on the right side of the offense. The other two are on the left side and now eliminated because Romo is running away from them. The Cowboys have left seven blockers in, and pressure is still impacting the play. Two offense linemen end up blocking nobody. This does not excuse what is to come, but it helped create the conditions for it to happen. 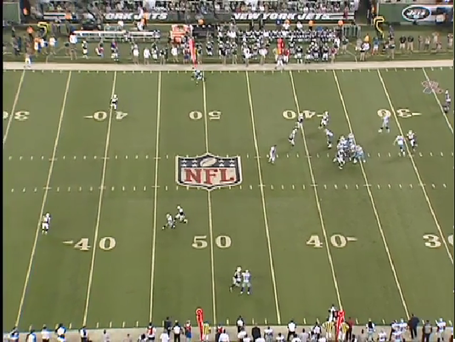 Bryant is matched up in man coverage underneath with Darrelle Revis. Romo lets the ball fly, presumably remembering his back shoulder completion to Bryant against Revis in the first quarter. What he does not seem to realize is Pool has broken back behind Revis, providing Darrelle with safety help. Because of this, Revis knows he can gamble and try to make a play on the ball instead of running all the way down the field with Bryant and then trying to make a play. Even if he misses, Pool is behind him and can make a tackle. Romo's throw is horrid, and Revis has an easy pick. Revis gets a block from David Harris and returns it into field goal range.