Q & A With Greg Prato, Author of The Sack Exchange

Share All sharing options for: Q & A With Greg Prato, Author of The Sack Exchange 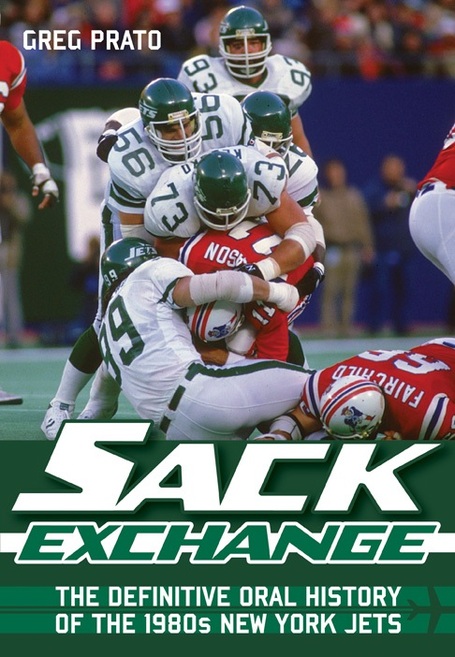 I was able to ask Greg Prato, author on the new book on the 1980's New York Jets, The Sack Exchange. Greg compiled interviews with relevant people around the team at that time.

Greg will be at Book Revue in Huntington on 9/22 at 7 PM talking about and signing Sack Exchange and Wesley Walker will be on hand to sign books, too. Here's more info - www.bookrevue.com/GregPratoWesleyWalker.html

What gave you the inspiration to take on a project like this?

I started following the Jets in 1981, so I still hold the '80s Jets era near and dear to my heart. I was always on the look out for a book that focused on this era, that would explain the team's ups and downs and what was going on behind the scenes. One never came my way, so I figured I'd take the plunge and pursue my first sports-related book (up until the release of 'Sack Exchange,' all my books and writing for sites/mags has been rock music-related).

Give us a short summary describing the book.

While the title states that it's about the '80s Jets, the book gives you background on the team up until the '80s, including the Super Bowl III/Joe Namath era. But starting with the year 1976, we go year by year, and the players, coaches, and those close to the team (plus one super Jets fan) analyze each season. It's also set up in the "oral history" format which I enjoy the most, which means each chapter is a collection of quotes from all the interviews I conducted - which I like to describe as a documentary...but in book form. Additionally, there are other chapters that deal with other topics, such as Shea Stadium, Jets fans, steroids, toughest teams and players the '80s Jets played against, etc.

How long did it take you to put it all together?

The interviews happened to take place throughout the Jets' 2009-10 season (both Rex Ryan and Mark Sanchez's first years with the team). So the book was pretty much completed and ready to go shortly thereafter, but it takes a while to design a book, get photos, etc, and it made the most sense to release the book at the start of a football season. And I think ECW Press did a phenomenal job putting it together.

What was the most difficult part of putting it all together?

The majority of my books - all of which you can find more info about and read sample chapters at http://www.lulu.com/spotlight/gregprato - are set up in the aforementioned oral history format, which is the same set up I followed with 'Sack Exchange,' which is my 7th release overall. So when I began work on it, I was quite familiar/experienced with how to put the whole thing together. It's kind of like putting together a giant jigsaw puzzle.

What one reflection on this time surprised you most?

Two way tie - that Mark Gastineau was pals with Eddie Van Halen, and Captain Kangaroo was a Jets fan!

From speaking with these guys, what do you think were the consensus greatest and worst moments in this era?

The greatest moments would include the comeback victory against Miami in '81, the playoff clinching victory against Green Bay in '81, and the two playoff victories in '82 (Cincinnati and Los Angeles). The worst moments would obviously be the Mud Bowl in Miami, the firing of Walt Michaels as head coach, and moving away from Shea Stadium.

Which Jet did you most enjoy dealing with during this project? Why?

Wesley Walker couldn't have been a greater help with helping me get interviews for the book and being just an all-around great guy. Also, he was completely honest in his interviews. Also, Greg Buttle and Walt Michaels had a lot of interesting stories and memories to share.

In what ways did this book change your previous perceptions about this era of Jets football?

I kind of had an idea about a few things as a long-time Jets fan before starting the book (that Klecko and Lyons didn't exactly see eye to eye with Gastineau back in the day, etc.), but it was interesting to learn that many players on the Miami Dolphins - including the notorious Mr. AJ Duhe, who was interviewed for the book - were pals with Jets players. That I did NOT know beforehand.

As a fan yourself who has just spent so much time researching what happened, what do you think the team could have done differently to have won a championship during this era?

Without a doubt, the overall consensus from the Jets players interviewed for 'Sack Exchange' was that the firing of Walt Michaels prevented the Jets from winning a championship sometime in the '80s. And after hearing them state their cases, I'd have to agree with them. It's still baffling how a coach could get fired after leading his team all the way to the AFC Championship - a game that was still winnable for the Jets in the 2nd half. Also, abruptly moving out of Shea Stadium for Giants Stadium robbed the Jets of their identity for a while, as players say it felt like they were playing road games there instead of home games.

From speaking with them, what do you think the biggest change is in the game from when these guys played it to today?

Players didn't make nearly as much money back then. In fact, in the Joe Namath era chapter, people talk about how the majority of players on the Super Bowl III winning Jets team had to get regular jobs in the off season. I think it was more for the love of the game back then. And also, there wasn't nearly as much dancing/celebrations after scoring a touchdown or doing a big play - which a few people in 'Sack Exchange' say Mark Gastineau helped popularize back in the early '80s with his "sack dance."

How would you compare the Jets of that era to today's Jets?

Both teams reached the AFC Championship and could have won it with a break or 2. Both team's identities were modeled after their head coach (and both Michaels and Rex Ryan favor defense). Also, both teams have a dynamic wide receiving tandem - Wesley Walker and Al Toon in the '80s, and Plaxico Burress and Santonio Holmes today.

Thanks to Greg for speaking with me. The Sack Exchange is great. It tells the story of the 1980's from the people who lived it. If you are a Jets fan, you will love the book.