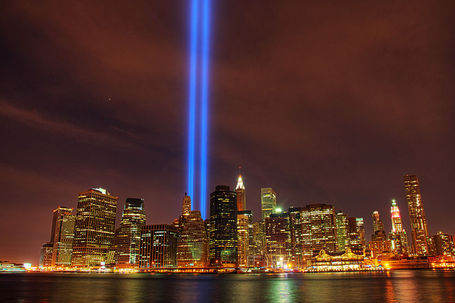 On a night where we remembered those tragically lost ten years ago, the Jets scored a thrilling win in the opener over Dallas. Gang Green is 1-0 after a 27-24 win over the Cowboys. Join me after the jump as we take a closer look at the win. While the real story of the day is summed up in the picture above, football gave us a necessary distraction and release.

Nick Folk: I do not want to take away from what Folk did in Indianapolis in January. It was a pressure filled kick, but it was also one almost every kicker in the league would have made. That was not the case tonight. When you hit from 50 yards in the last minute to win the game, you are the man. Consider my complaints about bringing Nick back withdrawn. He was also a consistent touchback machine. Most importantly, he drilled it into the end zone on the biggest kickoff of the night.

Darrelle Revis: I had the following conversation with my brother immediately after the game.

Me: Do I do an end zone dance with Bleacher Report guy?

I refer to this Bleacher Report article I linked to yesterday. Some of the author's extremely pro Cowboys predictions actually came true. In the comments section, he made an odd comment about Darrelle Revis not being a shutdown corner, though, for the following reason.

He had no interceptions in 2010 and 10 pass deflections, 21 fewer than in 2009. Deion Sanders never went a season without an interception.

Anybody who watched the Jets last year could have told you the reason Revis had no interceptions last year was his coverage was so good that quarterbacks stopped testing him. Judging a cornerback on interceptions is just crazy.

At any rate, Revis had a clutch interception tonight. Does that make him a shutdown corner? In my book, no. What makes him a shutdown corner is the way he dominated Dez Bryant after Bryant went crazy on Dallas' first series. Bryant got him once. Sometimes you just have to tip your cap. Revis did not finish his jam, and Tony Romo made a great back shoulder throw. After that, Bryant might as well have been a spectator.

Brian Schottenheimer: Yes, I know this will upset some of you. Some of you will vehemently disagree. I thought it took Schotty too long to adjust to the pressure Dallas was generating up front, but he eventually did. He started calling bootlegs, rollouts, and screens to slow down the pass rush. When he saw Dallas was reduced to playing backups in the secondary, he pushed the tempo, spread the field, and looked to exploit the matchups. It was an ugly start but a good finish. You might say he abandoned the run, but the Jets put up a lot of points tonight. He also used LaDainian Tomlinson effectively.

Plaxico Burress: Speaking of ugly starts and good finishes, Burress was not a factor in the first half. He could not create space. In the second half, he made some critical plays, including the 26 yard touchdown where he just won the ball. He finished with 4 catches for 72 yards

LaDainian Tomlinson: I think we are going to like him in a reduced role as a receiver. He finished with 6 catches for 73 yards and fought every last inch to pick up a late first down.

Santonio Holmes: He was the only receiver Mark Sanchez targeted early and with good reason. He finished with 6 catches for 72 yards and was constantly creating space with crisp routes. I said it before. I will say it again. The Jets picked the right wide receiver.

Dustin Keller: Good things happen when he gets involved with the passing game. He is a matchup problem for linebackers, who give him plenty of cushion underneath. He had 5 catches for 61 yards and a touchdown.

Shonn Greene: I was surprised because his line is ugly. He only had 26 yards on 10 carries. I blame the blocking. He ran tough and got every last yard.

Jim Leonhard: You know how I always say Leonhard is suspect in coverage but is a good player. Did you ever wonder what I meant? Look at his touchdown saving tackle on Jason Witten. Nine times out of ten, it doesn't matter, and Dallas scores. The effort Jim made on the play made the turnover possible.

Sione Pouha: It did not seem like Dallas made much of an effort to run inside. It was not terribly successful when they did. He gets props for that.

Mike Devito: Repeat what I wrote about Pouha, and add in his strip of Romo at the goal line.

Jeff Cumberland: It was good to see him get involved with the offense. He had a 33 yard reception. Having to match up with two big, athletic tight ends will give defenses problems when he and Keller are on the field at the same time.

David Harris: He did his typical workmanlike job stuffing the run. He had 7 tackles.

Bart Scott: He was a menace in the backfield. He finished with 8 tackles.

Muhammad Wilkerson: I was quietly surprised by the rookie. He held up well at the point of attack, better than I saw him in the preseason.

Ropati Pitoitua: Good work off the bench on the line.

Calvin Pace: He was quiet late, but he gave Tyron Smith problems in the first half rushing Romo.

Joe McKnight: The whipping boy was clutch tonight. The Cowboys blew an assignment, and McKnight made him play.

Mike Westhoff: They blew that assignment because Westhoff's design tricked them. Can we talk him out of retirement after this season?

Isiah Trufant: Granted, I probably could have scored on that blocked punt, but he picked the ball up and took it to the house. He did his job.

Rex Ryan: For playing prevent on the last series.

Matt Slauson: I thought he was the bright spot on the offensive line. It looked like successful runs generally went near him.

Garrett McIntyre: He made some plays on special teams.

Antonio Cromartie: He probably would have been the biggest goat had the team lost. He was burned for two touchdowns. It looked like he had a chance to make a play on the ball on both (on top of another completion he allowed that he had a play on). He did not fight hard enough. On the second touchdown, Miles Austin just wrestled the ball away from him. Even if you thought Cro had it, there is no excuse for letting another guy outbattle you. He was not good on returns and boneheadedly ran a ball out of the end zone from nine yards deep.

Mark Sanchez: I might get some heat for this because Sanchez threw for 335 yards and 2 touchdowns. The Jets cannot afford the mistakes he made on a consistent basis. Two turnovers on his own side of the field were his fault. The first was a force that went for an interception. The second was a fumble on a sack. He saw the blitz was coming. He knew there were more rushers than he had blockers. The ball has to come out quickly. On the last drive, he did not hit passes and made a very dumb throw that could have cost the Jets the game. When you make mistakes, they cannot be that costly.

D'Brickashaw Ferguson: Not terrible, but he got beat a few times. A guy protecting the edge of the blind side needs to be at zero.

Offensive Line: Mark Sanchez had no chance early, and they did not generate much of a push in the run game.

Eric Smith: I like him as a player. I do not like him as a starter because of plays like the big pass play to Witten. In today's NFL, athletic receiving tight ends are in vogue. Having a thumper like Smith at a safety spot next to a small, slow guy like Jim Leonhard is not a good recipe.

Bryan Thomas: I counted two plays where he set the edge well to snuff something out and three where he had a play stopped but missed it for a good gain.

Jeremy Kerley: It was a rough debut. He dropped a punt out of bounds and was not great on his returns. He will get better.

Mike Westhoff on the dropped punt: Kerley should not be back there when the other team is trying to pin the Jets deep. It is too risky to have a rookie there. I saw it with Justin Miller. I saw it with Kyle Wilson. When faster guys than you ever played against are flying at you, it is risky. There should be a good hands guy deep in Gang Green's territory.

The schedule now sets up favorably for Gang Green. Jacksonville awaits at home next week. Let us enjoy this one, though. The NFL is back, and the Jets are 1-0.