Calvin Pace is on the regional cover of Sports Illustrated's NFL preview issue. See below 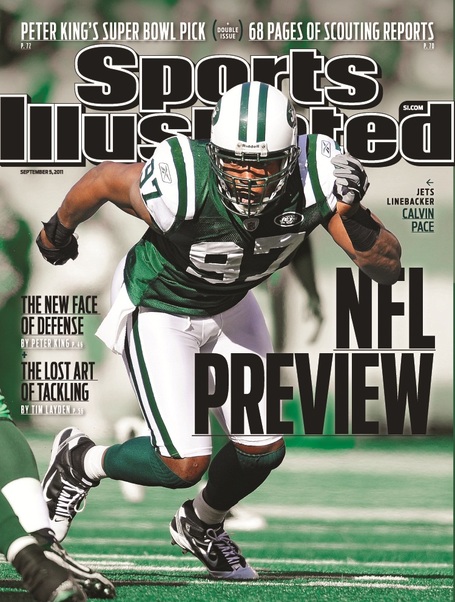 Peter King has the Jets finishing second in the division to the Patriots at 10-6, getting a Wild Card slot, and losing in the first round at Pittsburgh in an AFC Championship Game rematch.

Ben Reiter's team preview discusses the irony of the fact Mark Sanchez, generally considered a weak link, has been at his best in big games, and the team's failure to make the Super Bowl the last two years has been mainly due to breakdowns on the strong defense in back to back conference title games.

Specifically, two uncharacteristically poor halves sank the Jets: the second half against Indianapolis two seasons ago (17 points allowed) and the first half against Pittsburgh last January (24 points surrendered though one TD came on a fumble return). An effective Sanchez couldn’t quite hold on in the first game and couldn’t quite come back in the second.

Reiter agrees with many fans that Dustin Keller is the team's key player in 2011.

What are your thoughts?