Simon Says: What To Know If You Go This Sunday For The First Home Game

Share All sharing options for: Simon Says: What To Know If You Go This Sunday For The First Home Game

The Jets have their second preseason game, and first at home this Sunday at 7 P.M. I doubt there will be a huge crowd but nevertheless, here’s what you should know if you go…

■ Ticket/parking pass forwarding and resell will be turned off at 1 p.m. on Sunday.

■ Player warmups start at about 6 p.m.

■ Pre-kickoff festivities start at 6:50 p.m. The National Anthem is being performed by Ready in 10 lead singer Sal Nastasi

According to weather.com the temperature should be anywhere between 84 and 67 degrees, so not that hot. There’s a 40% chance of rain. Also FOR FANS SITTING IN THE UPPER DECK UNDER THE LIGHTS last year for the preseason game against the Giants, it was similary hot and we were attacked all night by moths flying around near the lights, and in our faces and food for the entire game. Be aware of this since it could be a problem.

NJ Transit has trains running from Secaucus to the Stadium, 1 stop if your going from NYC. It should be a pretty easy drive though since it’s just a preseason game so parking shouldn’t be to bad 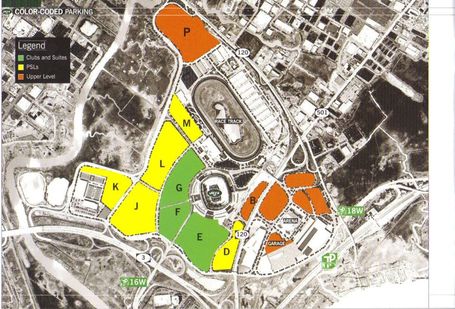 Parking is the same thing as last year so Green and Yellow spots are only for people with PSL’s. The orange spots are for people in the upper deck, there by IZOD, and you feel pretty far from the stadium but it’s pretty easy to get out from there. I’ve heard it can take a while from the yellow and green spots. Remember if you got tickets for just this game and don’t have a parking pass they won’t let you park in the lot, and I have no idea where you park if you don’t have a parking pass.

That’s basically it, should be interesting to see if they made any changes or additions to the stadium or lots. J E T S JETS JETS JETS