Where Has "Infinite Jets" Been?

Share All sharing options for: Where Has "Infinite Jets" Been?

For the past couple of weeks, I've been wondering what has happened to one of my favorite blogs, Martin Roche's Infinite Jets.  The last few months has been busy at my real life work - as you may have noticed with the absence of Flight Connections - and I just haven't been able to check the usual sites.  (I think I jinxed myself when I had so much downtime at work that I tried to revisit and write about the past few seasons with Jets Return Flight.)

Anyway, when I finally did get around to checking up on the blogs, I was unpleasantly surprised to find that Infinite Jets was no longer available. I loved reading through that site, sorting through the players past and present and obsessing about uniform numbers.  I also enjoyed seeing things through Martin's point of view.

Fortunately, however, there's this new thing called Google reader, and I seem to have been subscribed to Infinite Jets and many more.  Now I know what has happened to the blog.  Martin writes, "I didn't think that the Lockout would deplete my love of writing needlessly about my favorite sports team, but it has."  Read the last blog post after the jump.

I don't know his email so I couldn't get in touch with him, but I hope Martin doesn't mind me posting this:

Where Have I Been?

I didn't think that the Lockout would deplete my love of writing needlessly about my favorite sports team, but it has.

But it's more than that.  I live in a state whose governor shifted millions of dollars for higher education to the state's prison system.  I work in a school district that is millions and millions of dollars in debt and is consequently cutting jobs and will be cutting more deeply next year.  Meanwhile football is in the midst of an impasse that only reinforces our understanding that even the best-paid workers in the Western world have no leverage in the modern era against management.  Just as the owners would have it, I have been rendered apathetic in the face of it, prepared to go without, planning on getting Fox Soccer Channel, considering some kind of drastic lifestyle change to distract me from the crushing depression of Sundays that's there whether football is or not.

Yet I didn't think I'd want to stop writing the blog.  And I will again, eventually.  I'm trying to find something to say about the last of the #51's, but every time I've tried to get close to it, I just feel like I'm updating a Facebook page for someone who's been dead for a year.  Life should be for the living, and though pro football will be back one day, I feel like part of it has died for me.

I'm probably just being dramatic.  Did I think that football was not a perversely corporate enterprise?  Did I not remember how owners replaced players with scabs in 1987?  I remember a long time ago when I was working on a house rehab crew with a foreman from Queens who stared at my green Jets hat and said, "I'm glad you're not a Giants fan, but for me, I can't root for corporate sports.  No offense."  None taken, and I tried seeing things from his understanding.  I could conceptualize it in its entirety.  I could understand it rationally.  Yet I could not feel it molecularly.  What I love is a part of my nature.  I suppose that I'll be back when football is back.  I always have been.  But I hope the owners are surprised at how angry, galled and unmoved a great preponderance of economically strapped fans really are.  I hope they get a chance to see how appalling their craven greed for more than the lion's share of cash truly is.

Anyway, in terms of numbers, I'll leave you with this - a small tidbit on the web I found while reading about Buffalo Springfield, whom I wish I could see this summer.  Here's an August 1974 photo of David Crosby on stage with Stephen Stills, who frequently wore NFL uniforms at his shows.  You will notice that toward the left, Stills is actually wearing the jersey of Jets' safety Steve Tannen #21. 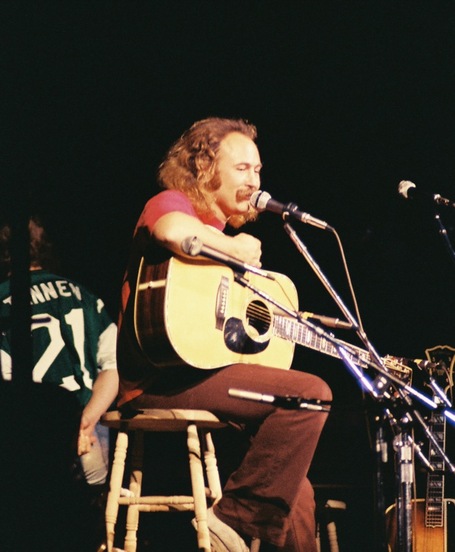 With seven interceptions in 1972, Tannen should have gone to the Pro Bowl.  Neither Crosby nor Stills probably knew that, but I feel like Crosby probably thought what my foreman at did; that pro football was an ordinary person's game for suckers.  Of course, Crosby quite possibly does not remember 1972 or 1974.  The Jets broke even both seasons.  I wish I could say the same for fans this year.  Ah well.  Stay tuned, if you're there.  I'll be back.  As will this sucker's game, eventually.

I can empathize with Martin.  I really hate the business side of football.  I hope the lockout ends soon, and I hope Infinite Jets will return and remain infinite.