Share All sharing options for: Braylon Edwards vs. Santonio Holmes on Route Running

I have stated multiple times that I think Santonio Holmes is an elite route runner, while I find Braylon Edwards' route running on everything other than deep routes unimpressive. Some have asked me to elaborate on this so I will try and do that here.

This is not an easy thing to do because it is based upon watching a lot. It develops over a long time. I will try and provide a few examples of what I am talking about.

Let's start with Holmes. Take a look at this route. He breaks Jonathan Wade's ankles. Look at how sharp that cut is. He's going full speed and breaking at almost a 90 degree angle. Now take a look at this one. He freezes Jason Allen with stutter steps and then hits his top speed quickly. This is a very tight route. If he rounds it off just a bit, Allen might catch up with him and be in good position.

Holmes does this consistently. Edwards does not. Where Edwards has success it tends to be less about route running than other factors. Let me give you an example.

More comes after the jump.

You might think Edwards' Week 3 touchdown would fit the mold. I do not think it does, though. On the play, Miami blitzes its left corner. The play rolls the coverage in that direction and has the two safeties and right corner responsible for a third of the field deep. With Jason Allen, the corner in question deep, Miami is pretty much conceding a completion if the blitz is not successful. The first goal is to get pressure on the quarterback. Failing that, the idea is to concede something underneath but live to fight another day. 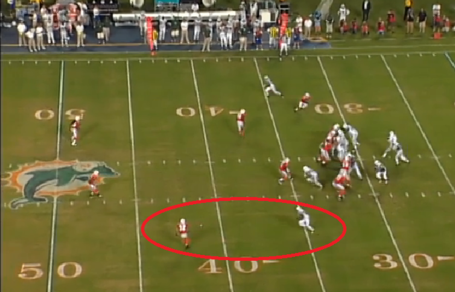 When Mark Sanchez and Edwards play pitch and catch, Allen comes in too hard trying to make the tackle and slips. Edwards takes it down the field for a touchdown. Was it a great play by Braylon? You bet your life. It was, however, a great play because he used his speed and took it to the house once he had open field. It was not because of route running.

Braylon's success is not really about route running. It is about being big, fast and athletic. He runs past guys. He wins contested balls in the air. On the short stuff, he provides a big target opposed to Holmes, who creates space with his route running.

I'm not going to jump ugly with anybody who thinks Braylon is a good route runner. I said as much in this space in the past. My views have evolved, though, watching him. I think he is a great deep route runner. That isn't all about speed and running past guys either. It is also about making subtle contortions to throw a defender off balance. He can run good routes on shorter stuff. He is just inconsistent, although he did improve some late in the year. Again, I think his success on short stuff is more about providing a big target (which is certainly valuable).

But in this offense and with this QB, Braylon is a better fit. Holmes would be near unstoppable in a precision offense with a QB like Brady or Manning tossing him the rock. But offense is predicated on running ball and a possession/big-play passing game. In our offense, physical mismatches are more valuable.

I actually think the exact opposite. With an accurate quarterback like Brady or Manning, receivers do not need to be as precise. The quarterback can make up for it. With a guy who is still developing accuracy, I would rather have the guy who creates space like Holmes. Braylon makes a lot of touch catches, but misses where guys are close to the ball can be a lot more costly than misses where the receiver has room. That's part of why I don't agree with the "Braylon is better for this team" argument.

So take it or leave it. That's where I am coming from when I talk about their route running. I would like to see both return, but it is one of many reasons I would make Holmes the priority.