Jim Tressel swept a lot of things under the rug in his 10-year tenure as head coach of Ohio State University. Marred with financial scandals and various NCAA violations to keep his players from being ruled ineligible, "Sweater Vest" resigned after over-using the ignorant, 'I was unaware of everything that happened' card.

Lucky for him, Jets C Nick Mangold is a loyal person -- and he weighed in with some thoughts about his former coach to NYDN's Manish Mehta via Twitter: 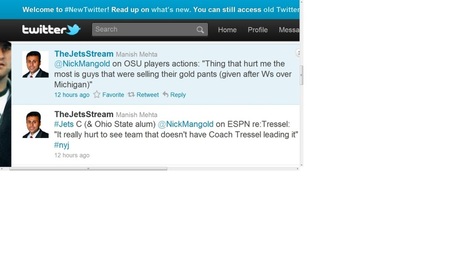 Tressel may not have been honest to the media and NCAA, but he did what he could to cut corners in order to maximize win potential. It appears some of his current and former players still respect him for that.

(Note: If you haven't read the investigative piece on Tressel which ran on SI's website yesterday, please check it out here. Amazing journalistic work that uncovered a pattern of violation history surrounding him as a head coach.)