Can Brian Schottenheimer Find a Happy Medium on Audibles?

Share All sharing options for: Can Brian Schottenheimer Find a Happy Medium on Audibles?

Some of the most aggravating staples of the Brian Schottenheimer Era as offensive coordinator for the Jets have been philosophical inconsistencies between two extremes. One example of this is the authority Mark Sanchez has had at the line of scrimmage. The first and last games of the 2010 season display the extremes.

In the opener against Baltimore, Schottenheimer actually called two plays for Sanchez for each snap. It was up to Sanchez to decide which to run based on what he saw from the defense. As one might imagine, this was an awful lot to put on a second year signal caller. Sanchez seemed overwhelmed that day and had an awful game. Schottenheimer for some unknown reason thought it was a good idea to add essentially the same play calling responsibilities Peyton Manning has to a guy who was still very much learning how to play the position.

Fast forward to the AFC Championship Game. In the fourth quarter, the Jets put together a drive that took up almost half the final period but resulted in no points. They were stalled at the 1 yard line as LaDainian Tomlinson was stuffed on fourth down. The third down play was a pass call, a slant that was batted down by Lamarr Woodley.

I'd like you to take a look at how the teams lined up for that play. 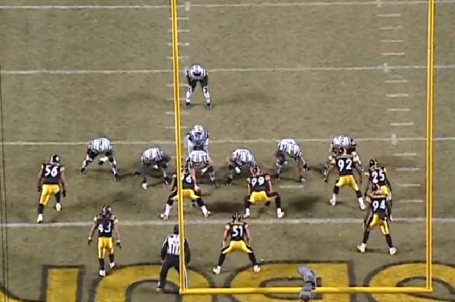 Look at how wide open the right side of the line is. What happens if the Jets run it there? Ziggy Hood is lined up against Nick Mangold, an advantage for the Jets. Woodley is lined up against Wayne Hunter. All Hunter really has to do is prevent Woodley from beating him cleanly to the inside. Brandon Moore is there to either give one of his linemates help or to block either Troy Polamalu or James Farrior if either flies in to try and make a play. I'm not going to tell you it's 100% the Jets score if they run right, but the odds are really, really good.

Sanchez did not change the play, though. He likely did not have the authority to do so. Either that or he did not recognize the advantage he had, which in many ways would be an even bigger indictment of the coaching he has received.

Now you might remember the Jets were having communication problems getting the play in with their radio system on this series, but that was not an issue here. The team was at the line with over 10 seconds left on the play clock.

Schottenheimer rightly scaled things back after that Baltimore game, but did he go too far. Perhaps it is best to not give Sanchez too much to think about at the line as he is learning, but surely there should be a mechanism for him to check out of a play when he needs one yard and has a clear advantage.

Brian Schottenheimer has a really good reputation in league circles and is considered head coaching material by many. It may not be easy finding the right balance, but a good coach should be able to do that.