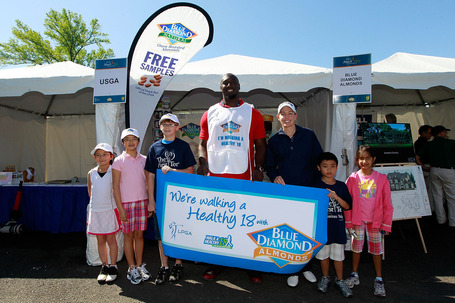 New York Jets first round pick Muhammad Wilkerson took some time from his schedule on Saturday to work for a good cause. He was at the LPGA's Sybase Match Play Championship as part of Blue Diamond Almonds' Walk a Healthy 18 campaign. Muhammad walked the course during the tournament with youngsters from the LPGA-USGA Girls Golf of Greater Trenton and Raritan Valley. It is part of an initiative of Blue Diamond Almonds to promote healthy lifestyles among youngsters.

I had the chance to meet and speak with Muhammad for a few minutes before he walked with the kids. Read the interview after the jump.

John B: Can you describe the process you went through in the month leading up to the Draft? Give the average fan an inside look at what you guys go through.

Muhammad Wilkerson: I was visiting teams interested in me. I traveled just about everywhere. I was on the West Coast and in the Midwest. I was meeting all of the GM's and everybody from the teams who were interested in me.

JB: What kind of drills did these teams put you through when you worked out for them?

MW: The drills for defensive linemen are going through bags to see how agile you are and how well you can change direction.

JB: What do you think the biggest challenge is going to be moving to end in a 3-4 opposed to playing mainly inside as you did in college?

MW: It's not going to be a big transition. I got to play in 4-3 and 3-4 looks in college. It's really about learning the techniques of how the Jets want me to play, mainly just learning the system.

JB: Describe the day you spent with the team in Florham Park the day after the Jets picked you in the first round.

MW: I just did a little press conference and met Mike Tannenbaum and all of those guys. I had already met with them when I did a workout with them. I did a few interviews and walked around the facility. That's about it.

JB: Did you get a playbook when you were there?

MW: Yes, the lockout was off that day so I did get a chance to get a playbook.

JB: To what degree is it more difficult to learn than the one you had in college?

MW: It is a little bit. The terminology and wording are a little different. I'm really a football fanatic, though, so learning a new playbook is not really hard. Once I sit down, I really get into it and it just comes to me.

JB: How challenging is it to not have your coaches while studying it?

MW: It is a bit challenging because there might be something subtle the coaches will want me to know that they can't tell me.

JB: What new teammates from the Jets have you heard from if any?

MW: The day of the press conference after the Draft, I saw Kyle Wilson. I also spoke with Bart Scott the other day. He told me that some of the other guys are going down to Miami to work out.

JB: Are you going to join them?

MW: Yeah, I possibly will. I'm looking forward to getting down there and working out with them.

JB: Do you have any messages for Jets fans?

MW: Just get ready. Just like any other Jet, I'm ready to get out there, get things rolling, and try and help this team get to the Super Bowl.