'Winning' is not something typically associated with Dallas Cowboys QB Tony Romo. He has won just one playoff game in his entire career -- and is currently on the back-end of a $67M contract extension. Saying he has failed to prove his worth is putting it kindly.

But Jets' WR Santonio Holmes, well he made "the catch" in the corner of the end zone FTW in Super Bowl XLIII and also contributed directly to three Jets' wins last season (Vs. Texans, Browns and Lions) in walk-off fashion. He is a game-changer and a proven #WINNER. Fact.

And All-Pro LT D'Brickashaw Ferguson was drafted No. 4 overall in the 2006 Draft and has helped cement the Jets offensive line as a force for years to come. Ferguson shut down some of the league's top pass rushers last season -- rendering them nearly invisible with his tremendous pass-blocking skills.

Analysts, even those that regularly appear on NFL Network, are voicing their opinion. 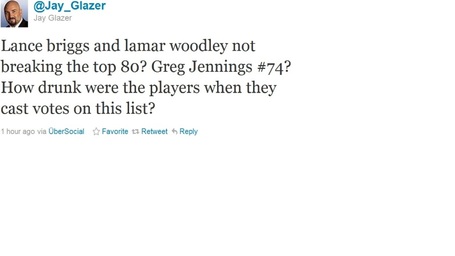 My take: This list really isn't to be taken seriously. Obviously some of the players voted out of jest. Romo missed the last two-thirds of the 2010 season after he broke his collarbone Vs. NYG. But in 6 games, while he did complete 69.5 percent of his passes, his TD:INT ratio was a mere 11:7.

Romo has had a plethora of offensive weapons to work with in Dallas. He has been given the tools to win, but seems to come up short every time under pressure (cue 2007 Romo'd snap Vs. Seahawks). In my opinion, even in a passing league, he shouldn't even make the Top 100 List. He's not a winner and cracks under pressure -- and I think this upcoming season may be the end of his tenure in Dallas.

Holmes and Ferguson are both Top 40 players if not better.

Ferguson, who was a top recruit out of college and received tutoring from nine-time Pro Bowl LG Alan Faneca, has been consistent for the Jets game-after-game. While he doesn't look for recognition, he has quietly shut down pass rushing extraordinaries such as DE James Harrison, DE Jared Allen and LB Jason Taylor (when in Miami).

The 27-year-old Holmes is in his prime; averaged over 14 yards per catch last season; and makes plays in the fourth quarter with the game on the line.

Holmes gives Jets fans something they haven't seen in more than a decade: A big-play wide receiver, that, coupled with QB Mark Sanchez, gives them faith Gang Green can come back and win any game -- no matter the situation. It took the two only 40 seconds to comeback against Houston.

Someone needs to inform Tony Romo of the voting rules for the Top 100 List : "One vote per person," and "Don't vote for yourself."