After a slow week in Jets news, the experts at NFL.Com have released some content to tide us over.

Seven experts as well as NFL fans weighed in on how they see the teams ranking going into the 2011-12 season.

The Jets made the top six on both lists. And there was some consistency between the two sets of rankings -- as the Packers, Patriots and Steelers rounded out the top three teams on both.

NFL Fan Rankings, as per NFL.Com: 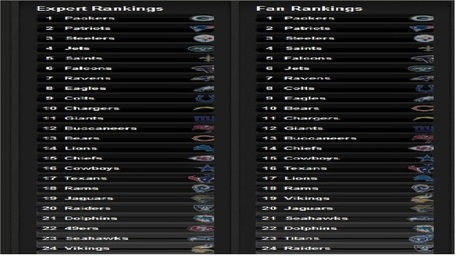 SBN's Ravens blog, Baltimore Beat Down, had some thoughts on the Jets ranking. Not sure I agree with them:

For whatever reason, despite their recent success, the New York Jets just don't impress me, but I guess the hype of the city and the "Sanchize" gets people's votes.

Clearly, the hype of the city is why the analysts pegged the Jets at No. 4.