ESPN's Mel Kiper had the following to say about the Draft the Jets had. 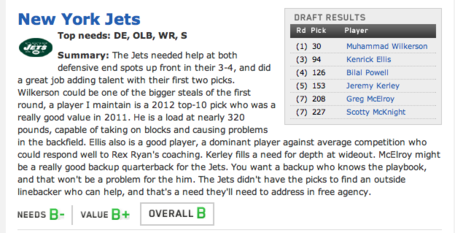 I do not like giving out letter grades because they are so subjective and frequently lack context, but I do not really disagree with anything Mel has to say. The Jets did not fill all of their needs in the 2011 NFL Draft, but they did find some guys who appear on the surface to be very good value picks. The first two days, they landed the best value guys they could get. On the third day, they added some guys with potential to fill specific roles in the future.

For reference, Mel also gave the Bills an overall B, the Dolphins a B-, and the Patriots a C+. Nobody got an A and only Detroit and Cincinnati got an A-. Of course, five years from now these grades potentially could look completely different from what they are today.