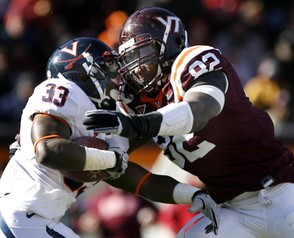 I don't think it is a secret that this defensive line is getting old. However, that does not mean it must be replaced with high-level picks and free agency, which was proven by the likes of Mike DeVito and Sione Pouha. I think Friday has some potential, and will at least be valuable on special teams, which is an area that Mike Tannenbuam and Rex Ryan take seriously. There are glimpses that he could really develop his pass rush, as he has only one year of starting experience.

That said, most sites have him ranked somewhere around the 25th best DE eligible for the draft. This draft is LOADED with talent at DE (probably going to break the record for DE's taken in the first round), so that number is a little deceiving. This is a good year to load up depth across the defensive line.

If he were available in the late rounds, say 5th or 6th, I wouldn't mind taking a chance on the kid. He is, however, older than most rookies, and most would feel more comfortable with more tape on the guy. However, Friday never takes a play off and looks like a kid who is willing to work. I wouldn't mind having a kid like that on my team.