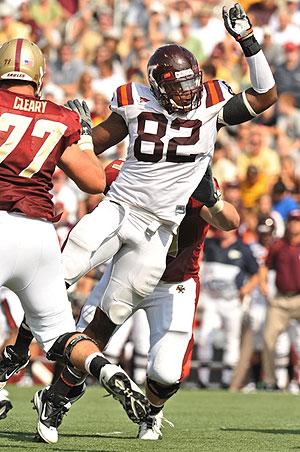 Friday could go in a lot of different directions. Because of his size, it would make sense to try him at OLB first. He is quick off the ball and has good pursuit. I think he has the potential to develop satisfactory coverage skills and can rush off the edge. Friday reminds me of a Bryan Thomas kind of player - he can do it all, but he not great at one particular thing. For example, you know Elvis Dumervil can rush the passer - that's his bread and butter. Friday lacks that identity as a player right now.

Another option is to have him put some weight on and be a Sean Ellis-type of player, a hybrid than can play 3-4 and 4-3 end. With the proper coaching, he could develop some skills, as he was only a starter at Tech for one year. Rex likes to move guys, especially smaller linemen and linebackers, all around the field. If is he good enough to play, Rex will find a spot for him. I know the big "need" right now is a bona-fide pass rusher, which Friday is not proven to be. He is, as of now, a potential role player that could provide depth along the d-line and perhaps at linebacker.

His biggest impact, however, could be on special teams. If you know anything about Frank Beamer's program at Virginia Tech, it is that he takes great pride in special teams. He refuses to simply let the bottom-of-the-roster guys fill in on special teams and puts his best players out to block punts and make plays. Friday is rare in that he is a star on the team that also plays on special teams regularly; most college stars are not accustomed to playing on teams.