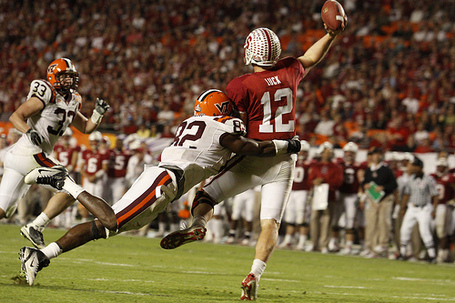 If you know anything about Bud Foster’s defenses, they take great pride in playing hard, employing their "lunch pail" defensive philosophy. Friday is no exception. Tech’s defensive front stops the run on the way to the quarterback, and Friday is above average against the run. I never really saw him "blow up" any run plays, but he holds his contain pretty well from what I have seen.

In terms of pass rush, Friday is the best rusher on the Hokie’s roster. He has decent sack numbers (8.5 in 2010) and gave Andrew Luck some fits in the Orange Bowl in the first half. He is more a bull rusher; he can do an outside rush from times to time, but that is not his forte. In passing situations, he shows good quickness off the ball.

Overall, I consider Friday to be a pretty complete player, at least at the college level. The question with Friday is whether he can perform this against the best competition. Can he shred blocks off an NFL tackle? Can he pursue the quicker tailbacks in the league? Virginia Tech only plays a few top-talent teams a year, not leaving a lot of evidence of good production against top talent.