This week FOX has a doubleheader while CBS will show one game to each region.

Giants at Jets early on FOX

Eagles at Cowboys late on FOX

Chargers at Lions late on CBS 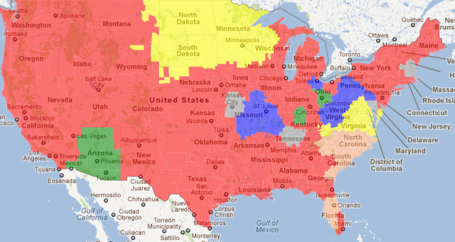 Most of the country is going to get to see the Jets play today. Areas in red will see Giants vs. Jets on your local FOX station. Those who live in areas not in red are going to have to make alternate arrangements if they want to see the critical game.

Remember, all afternoon games take place on Saturday this week as is the custom for the NFL when Christmas falls on a Sunday.

The entire nation will see Bears at Packers tomorrow on NBC and Falcons at Saints Monday on ESPN.

For a complete listing of Week 16 NFL coverage maps, click here to go to the506.com.