You might want to look away, but we are going to take a look at Tim Tebow's game winning touchdown run. 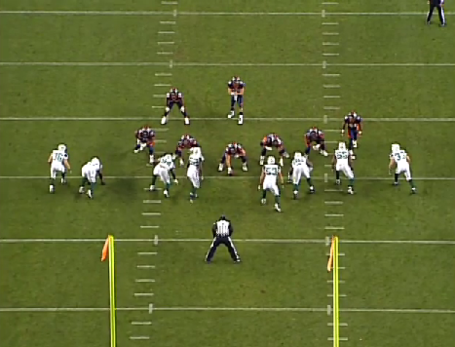 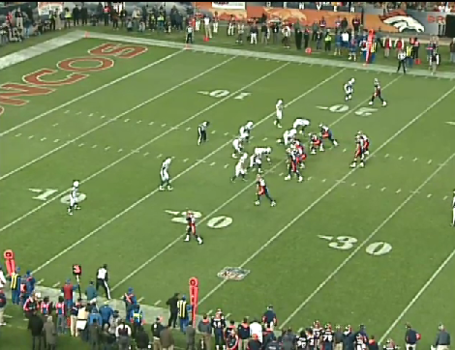 The Broncos line up with three receivers. The Jets are lining up with man to man across the board and nobody deep. The other eight Jets, consisting of three down linemen, three linebackers, and two safeties, are all near the line of scrimmage. Denver has one back flanking Tebow and one tight, Dante Rosario on the left end of the line. 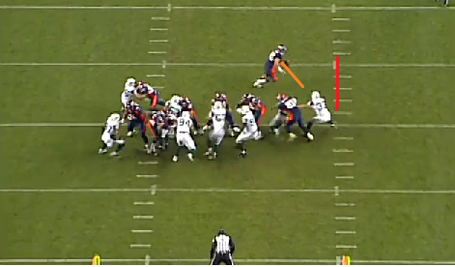 The Jets run an all out blitz. All eight guys are coming after the quarterback. As the outside man, Eric Smith's job is to contain on the outside. That means he can under no circumstances let Tebow get outside him. Everybody else is blitzing. The three corners are going to be run off by their men. Smith needs to take the path outlined in red to either make the tackle if Tebow runs left or force him back inside where there is help. Smith does not. He runs like a bat out of hell on a path to Tebow leaving nobody outside for force him back in. Smith claimed that he was fooled because he was supposed to cover the tight end in case he went out on a route. He could have fooled me. Smith showed zero hesitation off the snap. He went all out at Tebow.

If Smith does his job, this is the perfect call. Tebow was killing the Jets this drive with scrambles. By loading the field with defenders coming at him, his running lanes are gone. He is going to have to make a very quick read when he was showing an inability to hit even basic NFL passes. This easily could have resulted in a turnover. Because Smith did not do his job, Tebow has room to run. 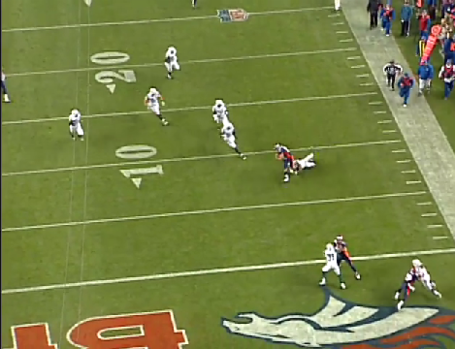 The Jets at the line frantically run after Tebow, but they have overrun the play blitzing. Smith does catch up inside the ten but fails to wrap and bring Tebow down when he has a chance. For some reason, Kyle Wilson and Antonio Cromartie do not identify or get off wide receiver blocks to make a play with Tebow bearing down near them, but this play is not their fault.