I would like to take a look at the Jets' first offensive play last week. It resulted in a Baltimore touchdown. It also does a good job showing us where the Jets miss Nick Mangold. I think sometimes people make the mistake of thinking an offensive lineman is effective if nobody is blowing immediately past him. Offensive lines function as a unit. A weakness in one spot can manifest itself elsewhere. 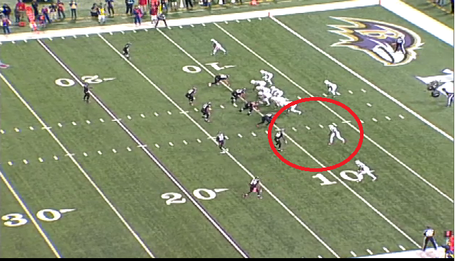 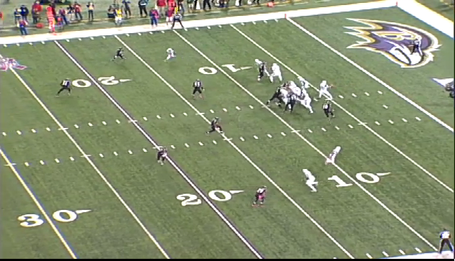 The Ravens play a cover two over the top, zone underneath, and blitz Reed with the four linemen. Mark Sanchez takes a three step drop. Sanchez's first read is Santonio Holmes to his right running a slant. Jameel McClain undercuts Holmes. It looks like Sanchez has a window. He begins his throwing motion, but it is too tight for his taste so he tucks the ball. When he recocks, Reed hits him for a fumble. What happened up front? 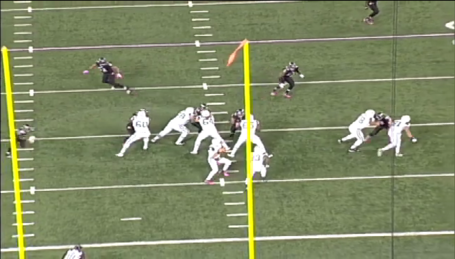 The issue is on the offensive line. Haloti Ngata lined up between Matt Slauson's outside shoulder and D'Brickashaw Ferguson's inside shoulder. At the snap, though, Ngata makes an inside move and heads for Colin Baxter. Slauson helps Baxter. Ferguson is left to handle Terrell Suggs, but nobody is left to take Reed blitzing. This is a great example of how the Jets really miss Nick Mangold. Slauson could have let Mangold take Ngata, slid to take Suggs, and let Ferguson slide to take Reed.

Now I do not think this play was Baxter's fault. Shonn Greene probably should have seen Reed coming and picked him up instead of immediately going into his route. I think Sanchez is the real culprit here. He knows he is up against an attacking defense. He knows he is having protection issues. The ball has to be out quick on a three step drop. He might not have time to recock. If the first thing is not there, take a seat, and live to see the next play. The loss of Mangold just affected the offense on every single play.