Instead of breaking down a play this week that had a critical impact on the outcome of the game, I would instead like to focus on a play that displays the frustration that is Brian Schottenheimer as an offensive coordinator. It is the first quarter third and three the Jets have at the Miami 39. Keep in mind the Jets need three yards for a first down here. 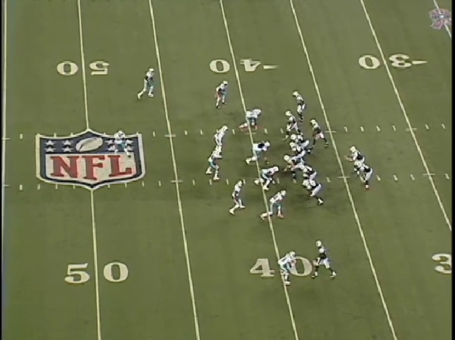 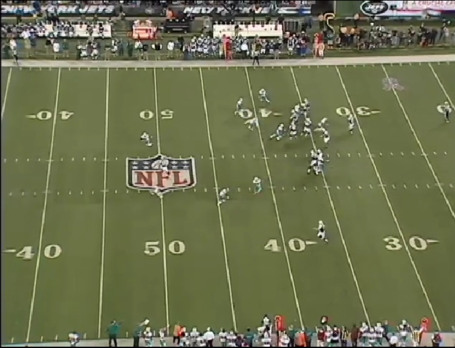 The Dolphins try and disguise their look presnap, but they end up with just four rushing. The Jets leave the three receivers bunched to the right in to block. Burress runs a pattern across the field to take away the cornerback. Sanchez leaps at the snap and pretends the snap has gone over his head. It goes to Tomlinson instead, who runs right. Sanchez takes off running left on a route. Tomlinson looks for the throwback. It actually appears to be open for a first down throw. It is a high degree of difficulty pass, though. LT wisely eats it. Karlos Dansby gets around the blockers, forces Tomlinson to change direction, and chases him down.

This play is simply a conceptual nightmare. What is wrong with it? You name it. For starters, you ask guys to do things they are not accustomed to doing, which is usually a recipe for disaster. Tomlinson is a running back. He might have a good track record as a thrower, but he is a running back. He is certainly not used to rolling one way and throwing another. It is a long cross field pass at that, which is always dangerous. Sanchez is not a wide receiver. He is asked to make a catch and run. What happens if it gets completed? You are exposing your quarterback to an open field hit. Would it have been too much to ask to line up in the Wildcat and at least let Jeremy Kerley go out? Instead, we have a Schotty special, trying to confuse the defense by utilizing his players in areas where they are not strong.

Yes, if this play works, Schottenheimer would be praised. That brings me to another issue. What exactly are the odds of this play working? How many throwback passes across the field are you going to have a running back complete to a quarterback? That is tough to do against air. Not only that, but Sanchez is not a good open field runner. This is not going to result in a big gain unless every single player on the side of the defense Sanchez is going to overpursues. The Dolphins may be a bad team, but players with NFL coaching and skills usually are not going to go that far away.

Yes, this was still in the scripted part of the game, but you cannot tell me this was a good call when three yards are needed for a struggling offense to pick up a first down.