For those of you who enjoy our play breakdown series, you are in luck. The sponsor above is asking SB Nation NFL blogs to break down a critical play from the previous week's game for the next few weeks. I am going to take the first play of the second half, a long completion to Wes Welker, which set the tone. 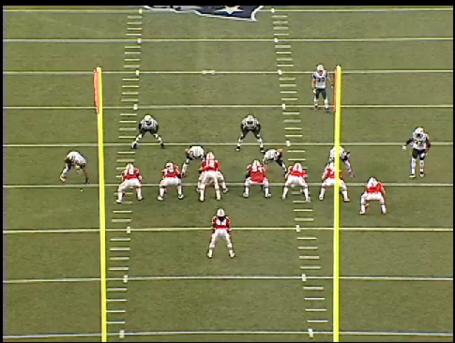 The Pats come out in a run formation. New England loads the right side of the line with blockers. They have Thomas Welch in at right tackle as an extra offensive lineman. Right tackle Nate Solder is a tight end, and Rob Gronkowski is to his right. The Jets are in a 4-3  with Calvin Pace at outside linebacker standing up at the line of scrimmage outside the tight end. 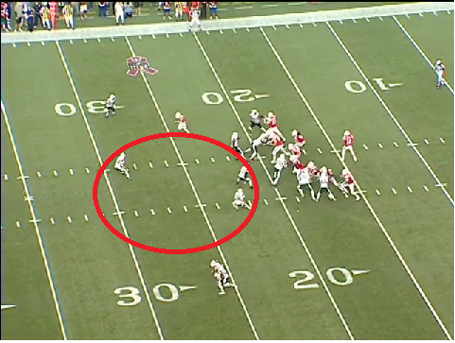 Gronkowski slides behind Solder right before the snap, and the Pats run play action. They fake an off tackle handoff to Benjarvis Green-Ellis. Gronkowski and Solder block. With the running back and two tight ends selling the run, the Pats only have two wide receivers on the play.

The Jets appear to be in a cover four defense with Darrelle Revis, Eric Smith, Jim Leonhard, and Antonio Cromartie each responsible for a quarter of the field deep. The Pats run the fake to perfection, though. I think this is a case where they took advantage of how studious Smith and Leonhard are. New England used a similar big formation a week before against Oakland and ran the ball with great success. As a result, the two safeties with a reputation for smarts see the run. Both bite down. Leonhard actually committed harder than Smith did. 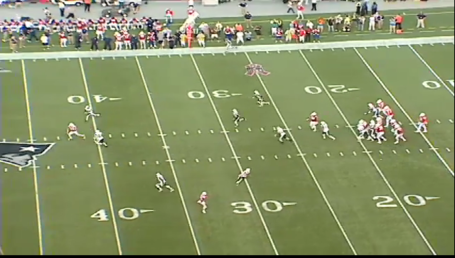 Antonio Cromartie has Deion Branch locked down on a vertical route on one side of the field, but Wes Welker works his way from Revis' quarter to Smith's quarter, where he can take advantage of Smith going the wrong way. Smith has to restart going back, but Welker running at full speed passes him. It is an easy pitch and catch for Tom Brady. Revis does not quit on the play and tackles Welker, but not before a huge gain.