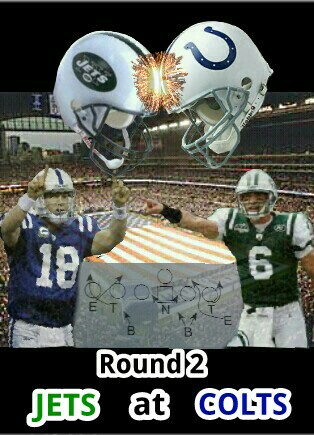 StatLine: Colts are 3-3 in wildcard round and 5-1 Vs. Rex Ryan (Ravens + Jets) during the Peyton Manning era.

Follow me after the jump as we break this one down ...

(Above matchup image via Paul Lucas.)

Over the years, the Colts (and their undersized, speedy defensive front) have been highly susceptible to power running attacks. They rank No. 25 against the run and are giving up 127 yards per game this year.

The Jets play smash mouth football and they do it well; it's no wonder why their mantra is "ground and pound." They rank No. 4 in NFL in rushing yards at 148.4 per game, using a heavy dose of LaDainian Tomlinson and Shonn Greene running behind their stout offensive line.

The Jets love to run the football to keep opposing safeties in the box instead of playing deep, in order to open up the play-action pass over the top. If they can get their run-game going, they will have favorable matchups with big-play targets such as Santonio Holmes, Braylon Edwards, and Dustin Keller finding themselves in man coverage.

Jets will need 100+ yards rushing to make QB Mark Sanchez's day easier and allow him to be a game manager. This is the antithesis of what the Colts will be looking to do, as their entire gameplan is centered around one of the most prolific quarterbacks of the 21st century, Peyton Manning.

When the two teams last met in the 2010 AFC Championship game, Manning managed 377 passing yards against the Jets secondary.

However, No. 18 has thrown 17 interceptions this year, his most since 2002. Jets DC Mike Pettine is a mastermind of using his exotic blitz looks to mix it up between bringing and disguising pressure,  and Gang Green will look to bring take Manning out of a rhythm by bringing it from everywhere.

Jets will need strong play from their safeties and linebackers in pass coverage this week, as the Colts love to spread teams out and allow Manning to pick apart seams in the defense with his arm. Darrelle Revis should be able to hold his own against Reggie Wayne, but Antonio Cromartie must utilize his size and play Pierre Garcon physical (when on him) and the unit must keep TE Jacob Tamme in check. They also need to limit the speedy Colts' receivers to minimal yards after they catch the ball.

The Colts play a Cover-2 defense, based on the "bend but don't break" principle.

Colts will likely start out the game with both safeties playing deep, so Sanchez will need to effectively "dip and dunk" and take the open pass underneath or in the flat when it's there. Jets will need to make a lot of third down conversions to win this game, because Colts defend the deep ball very well with their conservative approach to defense.

Jets will need big games from OT D'Brickashaw Ferguson and OT Damien Woody to keep DE Dwight Freeney and DE Robert Mathis from getting to Sanchez, as the two combine for 21 of Colt's 30 sacks. Cover-2 defenses are hinged on giving up the short pass but having the offensive unit make a mistake to kill drives, whether it be via: sack, turnover, or key third down stop.

What we can expect from the Jets ... OFFENSE

Gang Green will definitely look to establish the run early and often, fitting their "ground and pound" gameplan they preach about. I think they will look to running L.T. both in between the tackles and outside early on, and then as the game progresses, look to RB Shonn Greene to punch the Colts in the mouth as they wear down. The "War Machine," as he is called, has the power to physically run over defenders, and Indianapolis fields an undersized defensive front that struggles in defending the run.

Look for Tomlinson to carry the workload early and wear down the Colts, with the powerful Greene entering the game in the second half to finish them off.

What we can expect from the Jets ... DEFENSE

The Jets and their aggressive 3-4/4-3 hybrid defense love to bring pressure  - and they do it from every possible position. Even with all of the criticism from pundits about their pass rush, they still rank No. 8 in NFL in sacks (40).

While most teams look to get pressure mainly from their defensive front, the Jets do it from everywhere. In fact, about one third of their sacks come from players in their secondary.

Veteran QB Peyton Manning is one of the best in the NFL at making pre-snap reads and sniffing out where the pressure is coming from. On Saturday, it will be a cat-and-mouse game between him and DC Mike Pettine, as Jets will look to knock Manning out of a rhythm by disrupting his timing; as well as forcing him into making a couple of errant passes leading to turnovers.

The Colts pass more than any team in the NFL (42.5 times per game), and the Jets must get pressure on QB Peyton Manning to throw him off his game on Saturday.

If the Jets can run the football effectively to setup the pass, controlling the clock/time of possession and keeping No. 18 off the field, this game will play into their hands. The key will be converting on key downs: both in the red zone and on third down.

Manning will most likely be able to throw for near 300 yards, but if the Jets defense can disrupt his timing and force a couple of turnovers to kill drives, they will be in a great position to win.

Run the football and punch the small defensive front in the mouth; limit the time No. 18 has to pick up on our blitz schemes and where the pressure is coming from, and we have a great shot to win tomorrow. The Jets do have more balance on offense, after all.