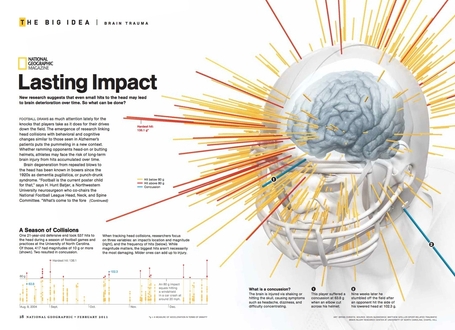 National Geographic is doing a timely feature in the February edition of the magazine on brain trauma.

Recent research indicates that small impacts can cause damage as much as big ones, widening the field of concern to young athletes, hockey players—and soldiers subject to head-rattling blasts.

I think the NFL is still kind of feeling its way through regulating helmet to helmet hits. There have probably been some times where the league has been too strict. The crackdown is still the right thing to do, though. I know football is a physical game, but you can still have a physical game without risking the lives of players.