Share All sharing options for: Jets-Steelers AFC Championship Preview: Rematch At The River 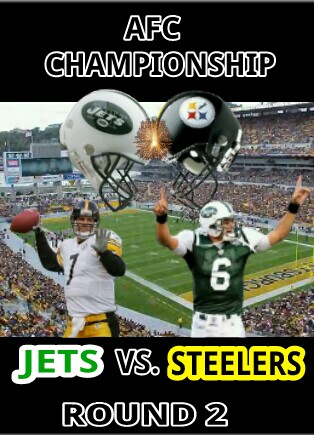 The New York Jets (13-5) take on the Pittsburgh Steelers (13-4). The game will be played in Heinz Field, Pittsburgh, Pa.

StoryLine: The Jets are now 4-1 in the postseason in the Rex Ryan / Mark Sanchez era. This team has been a work in progress over the last five years and is now built to win a Super Bowl. Credit goes to CEO Woody Johnson, bringing in major players such as GM Mike Tannenbaum who took some calculated risks and built a team with a great mix of young and veteran talent.

The calculated risks paid off thanks to the new regime and excellent Jets' coaching staff that was put in place to lead them...  and Gang Green now finds themself in the AFC Championship for the second consecutive year.

StatLine: With Jets' victory last week in Foxborough, QB Mark Sanchez tied QB Ben Roethlisberger's record for most postseason road wins (four). He will be looking to break the record on Sunday.

StatLine (II): Jets are the first team since Tennessee Titans in 2002 to beat Tom Brady and Peyton Manning in back-to-back weeks.

Match-ups: The Jets have won three of the last five meetings between the two teams.

For the second consecutive season, the Jets have played their best football when it has mattered most: late in the season.They have taken their success since mid-December and converted it into momentum which has carried them through the postseason.

Yes, the same postseason in which QB Mark Sanchez and HC Rex Ryan have won four of their five career postseason games -- all of which were on the road. Sanchez has a 92.2 career postseason passer rating; not bad for the 'kid' that all pundits were predicting to suffer through a terrible "sophomore slump" this year. Never happened.

The Jets have endured one of the toughest roads in NFL history this year. Gang Green has defeated the likes of QB Peyton Manning and QB Tom Brady (SI Peter King's personal hero), and now must defeat a physical, veteran Steelers team lead by QB Ben Roethlisberger.

No one said it was going to be easy -- but the Jets prefer it that way.

With CB Ike Taylor likely covering WR Santonio Holmes, Edwards' role is of extreme importance. Taylor is a much better cover corner than he gets credit for, and Holmes will have a tough match-up on Sunday. Still, Holmes has come up with many big plays this season when the Jets have needed it most, and that's hard to discount.

However, Edwards has the benefit of going up against Steelers' suspect CB Bryant McFadden. Earlier in the week, John touched on how bad McFadden really is.

The Jets targeted Bryant McFadden, Pittsburgh's second corner on 12 of 29 passing plays. Mark Sanchez hit 9 of those 12 passes for 88 yards, over half of his total. He allowed completions on just under 70% of passes. The 816 yards he allowed was eighth most in the league. Passers had a rating over 100 throwing against him.

Edwards had 53 receptions this season and led the Jets in receiving yards (904), yards per catch (17.1) and touchdowns (7). He also had four touchdown grabs of 40+ yards.

How Healthy Are The Steelers?

The Steelers suspect offensive line is banged-up right now. Both tackles (Adams and Scott) suffered injuries last week and will start on Sunday, but how effective will they be? If the Jets can attack the right gaps to exploit their offensive line, as well as wrap up Roethlisberger when he scrambles, it will bode well for them. The Jets' stout defensive front should be able to generate pressure on Sunday and win the battle in the trenches.

Even on defense, Steelers' two top playmakers are ailing. When's the last time we saw S Troy Polamalu miss two tackles in the same game? He did last week against Baltimore. His ankle is obviously bothering him, which will limit the angles the ballhawk can play as well as take away some of his tremendous range that makes him so great.

Furthermore, DE James Harrison, who has the physical makeup and tenacity to give Sanchez trouble, suffered a shoulder injury last week and won't be 100 percent on Sunday either. Harrison will also have a tough task going up against Jets Pro Bowl OT D'Brickashaw Ferguson, arguably the best tackle in the NFL this season.

What We Can Expect From ... JETS OFFENSE

For Gang Green, it starts and ends with a strong rushing attack, which plays into their schemes on offense as well as defense.

The Jets (and Chiefs) ran the ball more than any team in football this season, averaging 33 rushes per game. They do it often, and they do it well.

A strong running game during this postseason run has helped the Jets into many "3rd and manageable" downs. The pressure has been taken off of Sanchez who can either hit a receiver on a short slant or stunt as well as hand the football off in an attempt to gain a first down.

Speaking of first downs, according to Football Outsiders, the Jets ran on first down more than any other team this season (64 percent of the time). However, the Steelers have been exceptional defending first down runs, as teams are averaging only 2.7 yards on the ground on first down.

Look for Jets to use screen passes to get RB LaDainian Tomlinson going, as the Steelers defense was not good in that regard and averaged 8.3 yards per screen pass this year.

If the Jets can run the football successfully and control the time of possession in this game, they can wear down the older, veteran players on the Steelers defensive unit. They must also continue to play smart, turnover-free football, as the Steelers force takeaways as well as any team in the NFL.

What We Can Expect From ... JETS DEFENSE

The number one thing the Jets must do on defense on Sunday, is hit hard and wrap up when they are tackling. Ben Roethlisberger is one of the toughest players in the NFL to bring down, and Rashard Mendenhall is good at breaking tackles with his downhill running style also. Lastly, the Steelers' speedy wide receivers can burn teams for a big play if a tackle is missed in the secondary.

On defense, look for Jets to continue to use coverage-heavy schemes with two-deep safeties to limit the vertical pass over the top. This week, the Jets are faced with the daunting task of defending one of the fastest receivers in the NFL, Mike Wallace. The speedy wideout has a ridiculous average of 21 yards per catch. Jets must hit him and wrap up when he catches the ball and ensure a safety is keeping an eye on him so he cannot accumulate yards after catch or burn them for a big play. In the last month, Steelers have also worked young WRs Antonio Brown and Emmanuel Sanders into the offense. While both are rookies, they each possess great vertical speed and are deep threats.

I personally think the best way to defend Steelers' WR corps is similar to what the Jets did when the two teams last met. Put CB Darrelle Revis on WR Hines Ward and lock down Ben's favorite possession receiver, then put CB Antonio Cromartie on WR Mike Wallace with a bracket (safety, or LB if it's underneath) to help guard against him gaining yards after catch.

Roethlisberger will do what he does best: moving around in the pocket to try and buy time in order to find an open receiver. The Jets must bring pressure out of their defensive front against the Steelers' banged up offensive line to flush Roethlisberger out of the pocket as well as disrupt his timing. And when he does scramble, they need to attempt to strip the football from him whenever possible and force fumbles. Jets must make him pay for trying to extend the play.

Jets safeties must not bite on the pump-fake, Ben does this often to get his receivers open and the Jets must play the ball.

The Jets are arguably the hottest team in the AFC right now, but it's not going to be easy for them on Sunday. Since 2005, Steelers are 8-1 in the postseason and averaging 28 points per game.

Still, Steelers have injuries on both sides of the ball and are still a young team on offense. How can one trust rookie WRs Brown and Sanders to not make mistakes on Sunday? And people talk about K Nick Folk, but K Shaun Suisham has squeaked by all year, and has a history of choking in clutch situations.

This game is dedicated to you, Steve Young, for calling the Jets a "joke" and "total pretenders" after the 45-3 loss on Monday Night Football. This is for you, Tom Jackson, who Bart Scott owned last week on national television. This is for all of the doubters that said this team over-achieved and was going to fall flat on their behind.

It's been 42 years, and this team is hungry. Sorry 'Sixburgh,' but you've won enough. It's our time to shine, just like the Saints winning their first Super Bowl in franchise history last year. The football gods are on our side, and that's enough for me. Back in September before the season started, I picked the Jets and Saints to meet in the Super Bowl. This season has had a magical feel to it for Gang Green,  and they have just enough of it for one last trick: to propel them to JerryWorld.