Share All sharing options for: Jets-Patriots Preview: Gang Green Looks To Shock The World And Return To AFC Championship Game 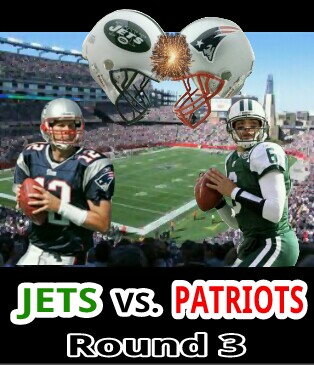 After a thrilling Nick Folk field goal in the final seconds carried the Jets to victory last week in Lucas Oil Stadium, we're shipping out to Boston, with the 2010-11 season on the line.

The Patriots may have been the hottest season coming into the playoffs, but anything can happen in the NFL postseason. The Jets have been scheming and preparing for this game all week, so let's break down how they can emerge as victors on Sunday and return to the AFC Championship game in back-to-back seasons.

StatLine: Patriots have not lost a game at home this season (8-0); their last home loss dates back to Jan. 10, 2010 in the AFC wildcard matchup with Baltimore Ravens.

Wait, They Won 14 Games With THIS Defense?

New England fields an opportunistic defense that will give up yards but thrives on turnovers. They average a turnover margin of +1.8 per game, and have forced 38 turnovers thus season (rank No. 2 in NFL). At the same time, they are looking to rebuild their defensive unit, and three starters are rookies.

They have an aging, veteran defensive front anchored by DT Vince Wilfork that is depleted, injured and has little depth. In the secondary, they are very young and quick to the ball but can still be exploited when in coverage as they lack NFL experience.

Is Tom Brady And Patriots' Offense Built To Beat the Blitz?

ESPN NY's Rich Cimini did some research and informs us Tom Brady was very good against the Jets in the most recent matchup in Week 13.  When Gang Green blitzed out of their secondary, he had a passer rating of 152.1 (compared to 60.2 in Week 2), and completed 70 percent of his passes (compared to 55 percent in Week 2).

Patriots' offense is built to beat the blitz, with Tom Brady taking quick dropbacks and firing short passes to his speedy targets who love to accumulate yards after catch. They love to run screens and misdirections, and Patriots receivers are great in the open-field and can kill their opposition if they are given space. They also have two young, athletic tight ends who are great targets for Brady in the red zone, especially Rob Gronkowski.

Last week, we saw a lot schemes centered around dropping into coverage from the Jets Vs. the Colts, rather than their usual blitz-blitz-blitz. Defensive coordinator Mike Pettine showed he could, indeed, call a more conservative game, which is why they only blitzed a defensive back out of their secondary during 14.8 percent of Peyton Manning's dropbacks.

Everything Gang Green looks to do in a football game is centered around a strong running game, and that goes for both sides of the ball. Smash-mouth football is extremely effective in the postseason as it not only eats up clock/controls time of possession but also allows for more offensive possessions/keeps opposing defense on the field.  Remember, the Colts only received three possessions in the entire second half last week because of Jets' ability to eat up clock with long offensive drives.

Establishing a strong rushing attack allows OC Brian Schottenheimer to call a conservative gameplan for Mark Sanchez by putting him in favorable, short yardage downs, as well as limit the amount of reads he has to make. At the same time, it will force the Patriots' safeties to cheat up to open up the play-action pass or misdirection/outside run for a big gain.

Remember, the play-action passing game was key in the Jets' postseason run last season, and Sanchez thrived off of it (completing 66.7 percent of passes and accumulating a passer rating of 136.7 in two wins).

Jets need to run to setup the pass as well as put Sanchez in manageable downs where he's not refined to sitting in the pocket and throwing on "3rd and longs."

Last week against the Colts, Jets employed a strategy that we've seen very little of in the Rex Ryan era: a defensive scheme based around playing 2 deep safeties to take away the vertical pass play from QB Peyton Manning. Guess what, it worked.

Jets and DC Mike Pettine will obviously still dial up some well-timed blitzes and bring pressure on occasion to attempt to throw Brady off and take him out of a rhythm, but expect his defensive unit to drop into coverage a lot more this week.

Last time the two met, Brady passed for 326 yards; but even worse, he averaged 15 yards per pass. Expect to see a lot more coverage this week to make it tougher on Brady, as well as limit Patriots when in the open-field.

Look for Jets to do what they've done a great job of all season long: stop the run. If they can shut down New England's ground game, they will force Patriots into a lot of passing downs and render them into a one-dimensional, pass-heavy, offense.

Sanchez is due for a correction and big game in Foxborough, as he he has just one touchdown, seven interceptions and a 30.4 passer rating in two career starts there.

The Jets will have to play a near-perfect, turnover-free game to win on Sunday as well as take New England out of their element. This is certainly no easy task, but maybe after 42 long years, maybe this is our year. We've certainly been on the short end of ‘good luck' many times. Look at what Arizona did in 2008, Saints in 2009; what if this could be our year? Remember, just last season, Brady lost the first postseason game of his career at home (he was previously 8-0).

Run the ball; convert on third down; don't turn the football over; and force Brady into strictly ‘passing' downs.