Football is here. The regular season is just around the corner, and the 2010-11 NFL season will be kicking off in just two weeks' time.

Thanks to the guys at Edge Shave Zone, we're going to kick off the season with a bang. They're hosting a pregame party for the Jets' MNF opener against the Ravens. The event will be held at Stout NYC on 9/13 and will take place from 5-9 P.M..

There will be free drinks, comedy acts, TONS of giveaways, and PS3 gaming tournaments also. It will certainly be a great time, and a great way to interact with other Jets' fans!

The event is invite-only, but we're going to be giving away four tickets to two lucky winners. As for the criteria to enter --- Tom Brady recently went on a radio show in Boston and said he hates the Jets. Well, that inspired us.

So, to enter, in honor of Edge's Anti-Irritation Zone and Tom Brady's insightful comment, we want you to tell us:

"What Irritates YOU Most About Tom Brady and the Patriots."

Entrants should proceed to the official entry thread, which is posted just below this one, or can be viewed by clicking (here). We will also accept Tweets to the GGN Twitter account (Twitter.com/GangGreenNation).

The writers and editors here at GGN will vote on the two best answers, and two winners will be announced on Tuesday morning. The contest will close at 9 A.M. EST on Monday, 8/30.

For all of the details surrounding the event, please view their official press release below. Hope to see you all enter, and good luck! 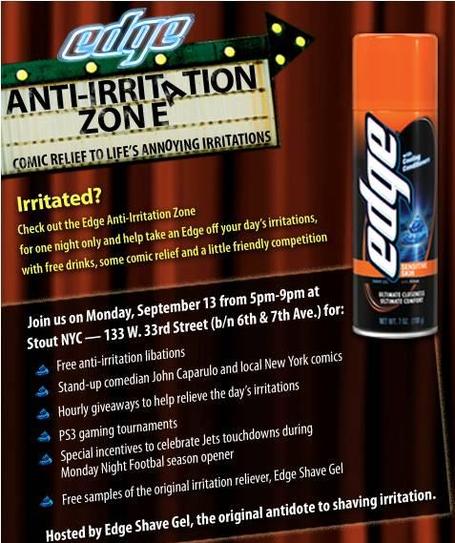