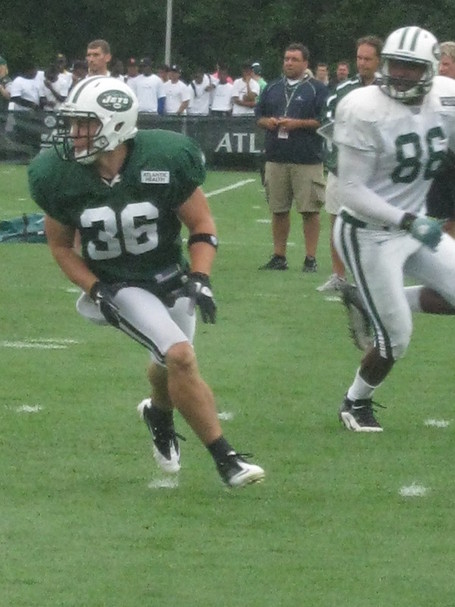 Yesterday was a cold, rainy day at Jets' Atlantic Health Training Facility, but that didn't matter.

Over 2,500 fans came out to voice their support for Gang Green, aged from youth to senior. It was a day which showcased some great pass-rushing off the edge from the defensive front and a very solid showing from Mike Westhoff's unit as well.

However,  the offensive unit the did not look nearly as sharp, at times looking out of sync stemming from inconsistency at the QB position.  From errant passes by the QB's, to some missed blocks upfront, to communication errors on routes, they just looked as if the unit was out of sync. However, it should be noted a lot of the first team was rested for a good chunk of the practice, and while first teamers such as WR Braylon Edwards, WR Santonio Holmes, RB LaDainian Tomlinson and TE Dustin Keller saw a lot of time, it was a mix-and-match unit out there at times as the Jets were just looking to avoid injury.

‘Conservative' was the Jets mantra towards today's practice.  As far as the play-calling on offense went, they focused on check-downs and simple stuff underneath in a lot of red zone scenarios, with some simple running plays mixed in as well.

A couple of notes/thoughts from today's practice: 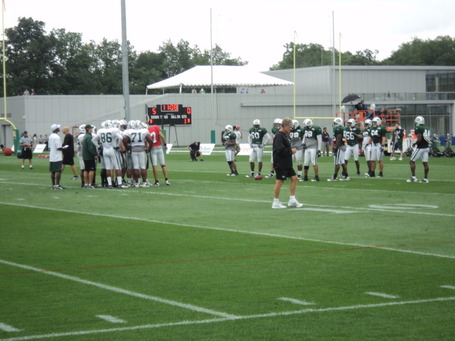 Highlight of the day --- OT Wayne Hunter, who begged for a route. He got one, and caught the pass as it hit him in stride while running a short "slant" route. Hunter then proceeded to celebrate via dancing as teammates cheered him on..... so hard, that he actually slipped and fell down flat on his butt!! Oops!

QB Mark Sanchez was inconsistent, and his accuracy and timing with receivers appeared off as it was in the Carolina game. His low point was when he missed Holmes who got himself free in the end-zone during red zone drills. He then followed that up with a pass which landed a yard away from a nearest receiver in the end zone and was well under-thrown.

Backup QB Mark Brunell looked the best out of the four QB's in my eyes. He was getting a lot of zip on his throws, and most were also right on target/on the money. He was hitting guys in stride, and seemed to be on the same page as his receivers. Don't let the numbers fool you, Brunell was on the other end of a couple of dropped balls by second/third team receivers which should have been routine receptions.

QB3 Kellen Clemens had a string of incomplete passes, and also had a problem with holding onto the ball too long, succumbing to three sacks by my count. HOWEVER, he did make the best throw of the day, lobbing a 30-yard pass to the back of the end zone hitting WR Marcus Henry In stride for the TD.

RB/KR Joe McKnight did not take many handoffs, but he did excel in returning punts. He did not muff a single one after fielding about 15 in total, and his positioning was very good. McKnight is a player that has been more of a home-run hitter and a bit inconsistent dating back to his college years at USC, and it was nice to see him returning kicks with a confident and motivated demeanor which had him locked in after every kick was in the air. He looked focused out there. Good to see.

RB LaDainian Tomlinson once again showed off his great hands, catching all three check-downs and lining up in the backfield for a good chunk of practice.

Jets' FBs all looked good. Jason Davis proved he's still a live dog for a spot on the team also, as he caught two passes. "The Terminator" John Conner and veteran Tony Richardson each snagged one as well. No bone-jarring hits were recorded, but as mentioned, the guys were taking it light today, saving their energy for the regular season as week 1 looms closer. 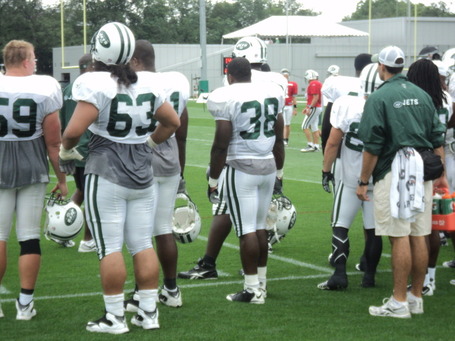 DE Vernon Gholston had a solid practice and logged a lot of minutes. He was getting off blocks rushing off the edge, and he showed an intensity that I have not seen from him since his college years. Rex clearly has him fired up now after the staged fight, and this is a very good sign.

LG Vladimir Ducasse got beat a good bit, and it appears there are still some issues with footwork and getting used to the zone-blocking scheme as he just looked lost out there. While he may be the guy of the future, I think it's safe to say Slauson will be starting at that position this year, as he took the first team's reps yet again.

WR David Clowney looked tentative. His route running looked awkward,. Also, while attempting to make  a catch, he cradled the ball against his chest instead of using his hands to properly bring it in. It worked, but he almost bobbled it. IMO, it does not look good for Clowney, and he may be cut by the time the season begins unless he can show some random flashes of brilliance on special teams and some consistency on offense. It's just not working out here, he hasn't even had his routine mammoth preseason game yet (with two left to be played).

OLB's Calvin Pace and Bryan Thomas looked good off the edge, as the Jets generated a lot of pressure coming from the outside, both upfront and from the LB corps. At the same time, they were going up against second string tackles, as the starters on the O-Line took it easy and stuck to some light drills early, then rested during the second half of practice.

K Nick Folk did not take any kicks, it appeared he was taking the day off after going 6/6 on Monday, as his  only activities yesterday included punting the ball back and forth with P Steve Weatherford.

Inactive - Neither LB Joshua Mauga or S Donovan Warren were in action. Both were dealing with head injuries. C Nick Mangold also sat out 11 on 11's, but participated in O-Line drills. 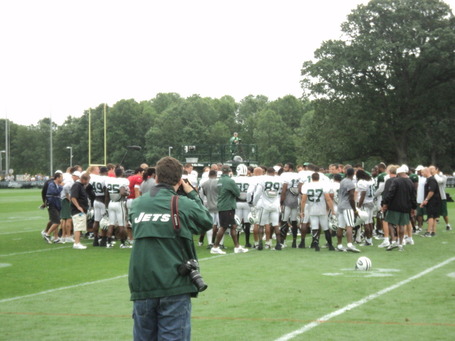 (Credit above Leonhard image at top of article to Lori who took/submitted it, a great shot indeed!)